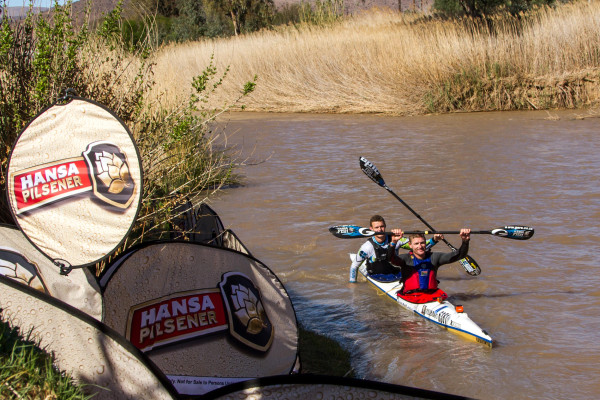 Defending champion Hank McGregor (front) is one of the elite stars who will be racing back from the surfski world champs in Tahiti to be on the start line to defend his Hansa Fish River Canoe Marathon K2 title. John Hishin/
Gameplan Media

Cradock – As entries opened for the 34th edition of the Hansa Fish River Canoe Marathon on Friday 9 and Saturday 10 October 2015, elite paddlers are sizing up an intense month of competition that will end with the hugely popular two-day marathon that ends in the Karoo town of Cradock.

The event, which will double as the SA K2 River Championships for 2015, often rubs shoulders with the ICF World Marathon Championships, putting elite paddlers under pressure to jet home from the Worlds and recover sufficiently and shrug off the jet lag to be in top form for the Friday morning start at Grassridge dam.

While the Marathon Worlds takes place in Györ in Hungary on the second weekend in September, easing that travel burden on the top paddlers, the situation has been complicated by the interest in the second ICF Surfski World Champs, which has been scheduled for the weekend before the Hansa Fish.

With South Africa boasting some of the world’s best surfski paddlers and title contenders, as well as the reigning world champion Sean Rice, many of the elite racers that will be expected to feature at the front of the Hansa Fish, will also be racing the surfski world title decider in Tahiti.

Tahiti is twelve time zones away, and arguably the furtherest travel challenge for a South African athlete. Conventional wisdom suggests that an athlete needs a day per time zone to fully recover from the effects of jet-lag, but for the top racers heading home from Tahiti, they won’t have that luxury.

Elite stars like defending K2 champ Hank McGregor are wrestling with flight schedules back from Tahiti in time to drive to Cradock for the registration day on Thursday 8 October, and must have had to settle for flights that land in Johannesburg during the evening of Wednesday 7 October, setting up a four day rollercoaster of travel to enable them to be on the start line for the Hansa Fish.

Word from the surfski community is that a number of international surfski paddlers plan to route the travel home from Tahiti via South Africa to enable them to take part in the Hansa Fish Canoe Marathon, which has a growing support-base abroad.

Since its inception in 1982 the 82km two day race from Grassridge Dam to Sports Club in Cradock has quickly become one of the most popular races on the national calendar, and often attracts the biggest race entry of the year.

Its popularity is rooted in the guaranteed 26 cumec water release from Grassridge dam that assures the paddlers of great fast flowing water for the many rapids and long stretches of river between them, and its unique challenging but accessible mix of white water, weirs, and the unique willow trees on the course.

The race will once again offer the novel Short Course option that was instituted last year to make this popular race accessible to novice paddlers, keen to experience the appeal of this river but without the background to handle some of the tougher obstacles or the longer distances.

Off the water, the town is fabled for its hospitality as it comes alive on the weekend of the race. Whether the paddlers take up the offer of camping laid on by the race, or stay in the many school hostels or local Bed and Breakfasts, the spirit in Cradock on the weekend of the Hansa Fish is unforgettable.

Synonymous with the event is the off-the-water festivities, and on the Friday and Saturday evenings the Cradock Sports Club will be alive with music at the Hansa Gig Rig. The popular, radio-friendly band Rubber Duc has already been confirmed as part of the line-up for the Saturday night.