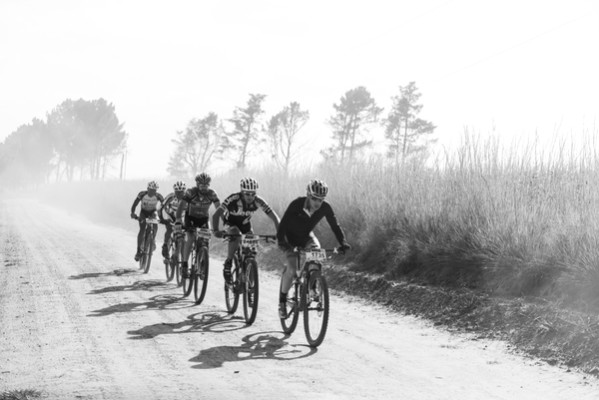 Germany’s Stefan Sahm and Switzerland’s Ariane Kleinhans won the men and women’s titles respectively at Round 3 of the 2015 Ashburton Investments National MTB Series in Clarens, in the Eastern Free State, South Africa at the weekend. The event also doubled as Round 3 of the International Cycling Union’s 2015 Marathon World Series.

Sahm, a three-time winner of the Absa Cape Epic, measured his effort over the challenging 118km route perfectly, riding away from a six-man lead group with 8km remaining. He clocked a winning time of 4 hours 49minutes 51 seconds. Second place went to Switzerland’s Konny Looser (Meerendal Wheeler) in 4:50:24, with South African Max Knox (Biogen Volcan) rounding out the top three in 4:50:33.

In the women’s race over 75km, Kleinhans set a hard pace from the start to claim the title in a time of 3:16:11. She was followed home by RECM teammate, Cherise Stander, two-and-a-half minutes later, with Swedish Marathon Champion, Jennie Stenerhag (Ascendis Health) completing the podium in 3:20:00.

The men’s race saw a tense battle develop with 15 riders in the lead pack going into Witkrans, 35km into the race. Some aggressive racing by Team RECM saw the pack whittled down to eight with James Reid and Erik Kleinhans driving the pace in an effort to soften up RECM’s rivals and set something up for teammate and defending champion, Nico Bell.

But Bell was forced to withdraw after his rear derailleur broke when a piece of wire became entangled in it. Kleinhans began to fade as the race wore on, but Reid, the current South African marathon champion, was making the pace hard upfront, claiming the King of the Mountains title and trimming and the group down to six: Reid, Sahm, Looser, Knox, Matt Beers and Series Leader, Waylon Woolcock, competing in his first race without a sponsor.

The steep, unpredictable slick rock climbing section proved a telling factor with Looser and Reid the most capable in conquering it. Beers lost the front group, and with 8km remaining on a climb, Sahm increased his pace and rode clear, splintering the group in the process.

The 38-year-old German was hungry for the win though and he managed to hold off a game Looser and Knox in the final run in to the finish in the Clarens Town Square. Woolcock missed a turn and had to chase hard to catch Reid, just losing the sprint for fourth to the RECM rider.

“The route was unbelievable! You don’t get slick rock like that in a race anywhere else. The organisation and trails were just excellent. The race was very competitive and there were bunches throughout almost, which made for close racing,” said an elated Sahm.

“Stefan attacked at just the right time. I was so keen to win here and I gave it my all from the start. But Stefan was just too strong at the end. I’m happy with second place after a battle like that,” smiled Looser.

In the women’s race, Kleinhans may have led from start to finish, claiming the Queen of the Mountain title in the process, but the gaps between the women were a lot smaller than normal, indicating a competitive field. Runner-up Stander was somewhat of a surprise. She has been focussed on road racing recently but is clearly beginning to rediscover the form that took her to the South African Marathon title in 2012.

Just over a minute behind Stander was Stenerhag, who was left to launch a lone onslaught on the title after Ascendis Health teammate and South African marathon champion; Robyn de Groot was forced to withdraw due to a niggling shoulder injury.

“I found the first 20km very technical, but I managed to get a gap not knowing there would be flat open roads after that. When I got to the gravel roads though, I put myself into time trial mode and just went for it. It’s great to have Cherise finish second. I’m happy for her and the team to have the top two places,” smiled Kleinhans.