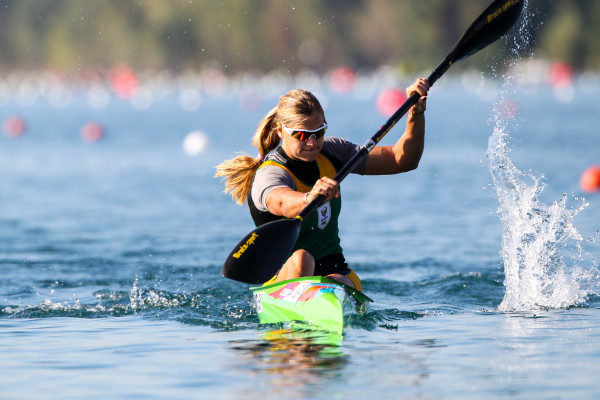 Hartley received the news on the weekend from the International Canoe Federation following the World Championships in Milan that determined the allocation of places for the male and female kayak and canoe athletes.

“The wait has been so long and I feel really excited knowing that it is finally official,” said Hartley as she packed her bags to join the South African team at the marathon world Championships in Győr, Hungary this weekend.

Her excitement was echoed by her federation as Canoeing South Africa’s President Christo Horn was quick to add his congratulations, followed by hordes of her followers and admirers.

Hartley had something of an agonising wait until the ICF rubber-stamped her place at the Rio showcase.

At the Milan World Championships she ended up in a loaded women’s 500m K1 semi-final where she finished behind two of the three eventual medalists in Hungary’s Anna Karasz, who won silver, and China’s Yu Zhou who claimed the bronze so Hartley missed out on the A final, where the top eight were the first allocated places in the Olympic qualification process.

She went on to convincingly win her B final in a time that would have seen her finish in the top six of the A final.

Hartley won a bronze medal at the 2014 World Champs in Moscow, mirroring her London 2012 exploits, and has been a regular feature of the World Cup 500m K1 final line-ups.

Once the complex matrix, that includes athletes that qualified in other events, team boat doubling up and host nation allocations, was completed the ICF released the full list primary qualifications with Hartley comfortably making the qualification.

Hartley admitted that the two week waiting period between the World Championships and the final ICF announcement had been emotional.

“I enjoyed experiencing the joy of the medalists and my friends who have (automatically) qualified a spot for Rio Olympics 2016, she said. “There was heart ache too, when split seconds separated the best in the world.”

Hartley also showed her excellent form by winning the new Marathon World Cup Short Course in Brandenberg in Germany a few weeks ago, following her victory in the SA Marathon Champs and selection for the national team to the longer form of the sport.