Hatherly and Beers Reign Supreme in the Wind 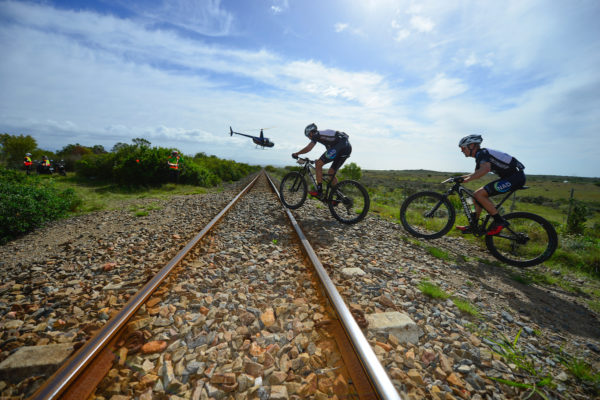 Alan Hatherly and Matt Beers, of Team Spur/Red-E, conquered the wind and their Momentum Health Cape Pioneer Trek, presented by Biogen, rivals to secure stage victory on Monday, the 16th of October. Their compatriots, Ariane Lüthi and Amy-Beth McDougall, also secured back-to-back stage honours, for Team Spur/Valencia, on stage two of the 2017 race.

The 71 kilometre route featured a profile punctuated by short, sharp, climbs and rocky descents but the overriding element which dominated the stage was the wind. It blew relentlessly from the South West, reducing the riders’ racing instincts to one of survival – turning the relatively short stage into a war of attrition.

“It was worse than the Netherlands out there” laughed Gerben Mos, of KMC Fruit to Go, from the shelter of Milkwood Primary School; the day’s finish venue. “There was no point in attacking on the climbs into the block head wind” reflected Nico Bell, “so we rode quite conservatively for most of the stage.” The NAD Pro Team, of Bell and Gawie Combrink once again spearhead the leading men’s field with Hatherly and Beers. Joining them at front of the race for much of the day was the eventual third place finishers, Mos and Bram Rood of KMC Fruit to Go, and the SPOT Africa team of Timothy Hammond and Derrin Smith.

The day’s only significant casualties were the Kelly’s Bikeranch combination of Jiri Krivanek and Marek Rauchfuss. Krivanek suffered a rear wheel puncture as the route turned off the tar roads of Mossel Bay to navigate through the Pinnacle Point estate. As the puncture would not seal he was forced to resort to inserting in a tube, by which time the lead group had disappeared into the distance. With no assistance from equally strong riders the Czech pair was forced to concede their third position on the general classification standings.

The leading four teams maintained the status quo until the final twenty kilometres when first SPOT Africa and then KMC Fruit to Go dropped off leaving NAD Pro and Team Spur/Red-E to contest the stage victory. The decisive move came within the final kilometres of the stage. “There is a little singletrack chicane, with about a kilometre to go, it kicks up slightly and Alan [Hatherly] and I attacked there” Beers explained post stage. Picking up the story Hatherly continued: “we got a small gap, maybe two or three seconds on NAD, and then we just went full gas to the finish. I’m happy with the stage win and we’re looking forward to another day in yellow tomorrow.”

In the women’s race Lüthi and McDougall once again set the pace from the off, but in the head winds they were forced to slowly extend their gains unlike on the previous day when they rapidly established a significant buffer. Robyn de Groot and Sabine Spitz lost 3 minutes and 22 seconds to the Spur/Valencia combination. “I just could not make the split,” De Groot confessed “and after that we spent most of the day on our own. Sabine [Spitz] did a phenomenal amount of work on the front to limit our losses.”

The third stage of the Momentum Health Cape Pioneer Trek, presented by Biogen, is the first journey stage of the 2017 race. It takes the riders 99 kilometres from Mossel Bay to George along the foothills of the Outeniqua Mountains, along many a district and forestry road. “I’m really looking forward to stage three,” Lüthi said. “I love trail riding, but sometimes it is great to race in a bunch on the gravel roads. It requires you to think about tactics and I guess it helps that I am tall, so I can see what is happening in the group.”

Stage three features 2 000 metres of climbing, making it the second toughest stage of the race on paper, but the smooth road surfaces and the predicted tail wind could make it significantly easier. To see how it unfolds mountain biking fans can follow the action live on the event’s Twitter handle, @CapePioneerTrek.

While the highlights from every stage of the race of the Cape Pioneer Trek can be viewed on the event Facebook page and the Dryland Event Management YouTube Channel from 20:00, Central African Time, daily. For more information on the Momentum Health Cape Pioneer Trek, presented by Biogen, please visit www.capepioneer.co.za.

For all the results from the 2017 Momentum Health Cape Pioneer Trek, presented by Biogen please click here.