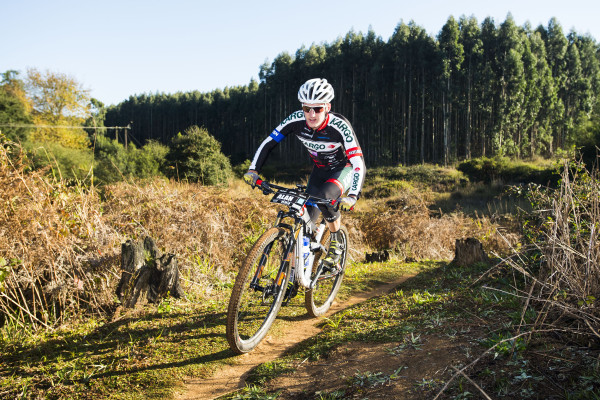 Having only recently return from a successful UCI MTB World Cup trip to Europe, Hatherly came into the clash looking to maintain his international cross country race pace ahead of his upcoming Swizz World Cup clash.

A blistering start by the young lad saw him well clear of the rest of the field within the first few kilometers and able to focus fully on his pre-race plans as he overcame the early morning cold and charged through the vast stretches of memorable single track through Sappi’s plantations.

“The course makes the riding here very much like a cross country race because you’ll push hard for 500m or so and then you’ve got to brake and get through a bit of a technical section and then look to try get your pace back up again as quickly as possible,” said Hatherly.

“I was surprised at how quickly I managed to get away from the guys at the beginning but once I got away I just looked to try keep my pace up as best I could.

“With us doing a lot of the sections in reverse to how we have previously I was surprised at how much longer the race was, which was probably a good thing for me as far as my training goes, so overall it was a really good exercise for me,” he added.

Hatherly’s dominance soon saw the race become about second place for the rest of the field and in the end it was young Callan Deacon who held off Brennan Anderson, Lance Chapman and Howick local Jedson Tooms (ROAG Racing) for the second step on the podium.

Former Sharks rugby star Jeremy Thomson continued his remarkable run at the event when he bagged yet another top ten finish, crossing the line in seventh overall while Sappi-sponsored Thami Kunene performed admirably in the saddle to clinch a 35th placed finish, one place ahead of women’s winner Theunissen.

Much like Hatherly, Theunissen was a lone figure at the front of the women’s clash throughout as she made light work of the enjoyable 40km course.

The race for second in the women’s contest was another fascinating affair as a sprint finish saw Nadine Nunes narrowly edge out Riana Niehaus for second while Tanya Ortlepp crossed the line just seconds later in fourth.

The Sappi 19km Intermediate ride was again a popular choice for the less experienced, skilled and adventurous with Leonard Robberts and young Sarah Ryan claiming the men’s and women’s race victories respectively.

The 2015 Sappi Howick MTB Race takes place from Howick High School on Sunday 7 June with participants able to choose from the 10km Family Ride, 19km Sappi Intermediate Ride and the 40km Sappi Howick Classic. Entries can be submitted online via www.roag.co.za by 3 June and more information can be found at www.howickmountainbiking.coza