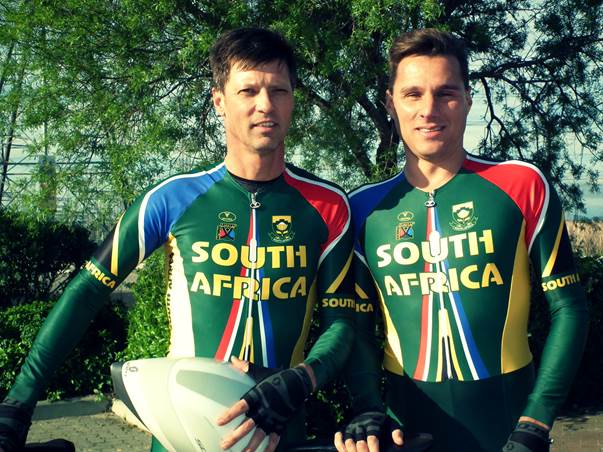 This coming weekend, the world’s best Para-cyclists will be making their way to Pietermaritzburg to compete in the only World Cup race outside of Europe this year at the fourth round of the 2015 UCI Para-cycling Road World Cup from 11 to 13 September.

Blind South African adventurer and motivational speaker Hein Wagner, with co-pilot Alwyn de Kock on a tandem, form part of the national team representing South Africa in the final World Cup round in 2015.

Says Hein Wagner: “It was a very proud moment when I received confirmation after the National Championships in February this year that I was selected to be part of the national team. There is something so powerful in wearing your SA kit. It makes me feel bulletproof! As this is my first international Para-cycling competition, I don’t really know what to expect. Just looking at the international line-up for the blind tandem men’s race is enough to make me eat more pap! We’ll give it our best and then some!” Wagner’s co-pilot and training partner, Alwyn de Kock adds: “I’m very excited. This is a project Hein and I talked about and planned a year ago. It’s wonderful to see the plan coming together.”

According to Wagner, a top 3 finish will bode well for their future. “If we perform well at the upcoming World Cup, we hope to get invited to more international events in the future. We dream of going to the 2016 Rio Paralympics. Obviously, it’s going to take a lot of hard work and although it’s our ambition, we’re taking this one step at a time.” De Kock reckons a top three finish will give them a lot of satisfaction. “It will prove that the effort was worth it and also that we can progress to the next level. In order to participate at Rio, we need international points and hopefully podium finishes.”

According to Wagner, he and De Kock are on a very intense training program to improve both power and speed.  “We aim to train together three times per week and for the rest we train on our own.  A typical training week will see us doing one long ride of around 110 km and 5 sets of intervals at different intensities. So in short 6 days per week.”

De Kock comments that they have been on a twelve week training plan. “I feel we’re in good condition. We’ve never raced against any of the world’s best Para-tandem racers, so we’re a bit in the dark. We’re just going to give it our best shot and try to race smart. We both have fulltime jobs but try to train together whenever it is possible. When we can’t train together, we do identical programs with separate trainers.”

Both Wagner and De Kock follow a balanced diet. Adds Wagner:  “However, due to the intensity of the training, I have some interesting cravings from time to time. They normally include something sweet!”

Wagner and De Kock’s biggest goal for this year is to perform well at the upcoming World Cup. Wagner also does not want to disappoint his training partner. “Alwyn has put a huge amount of effort in to making my dream a reality and I owe him my best performance on the day. What a privilege it is to represent this amazing country at an international event!”