Hennops turns up the heat with another humdinger 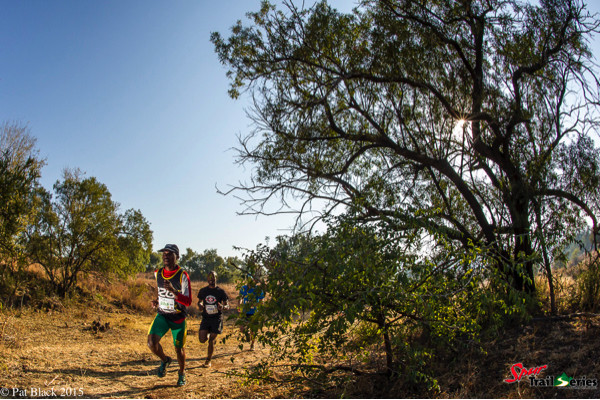 Edwin Sesipi on his way to another first place at the Spur Gauteng Winter Trail Series™. Image by Pat Black

The second race of the Spur Gauteng Winter Trail Series™ was as exciting as race 1 with just over 1100 runners making their way out to the countryside to take on the trails.

As is customary, race 2 sees the addition of a once-off XL course for those runners looking for a longer challenge. At 18,7km, this route that offers great variety and it was the familiar face of Tranquil Gumbo who stormed his way to the title by winning in a time of 01:34:48 while Estie Brits claimed the ladies’ title with her time of 2:03:12.

In the men’s long course Championship race, runners had to negotiate a 12,5km undulating trail and it was no surprise to see Edwin Sesipi out in front, though he was kept company by newcomer, Fidel Ncube for much of the race. Sesipi eventually took top honours for the second week in a row with a time of 57:23. In the ladies race it was two out of two for Lerentia Strydom as she ran an awesome race to claim top spot in a time of 01:08:55.

The short course Challenge race was a super quick 4.65km and it wasn’t long before Janco Erasmus sprinted down the straight in 21:08, barely beating Ezra Ferreira and Keegan Dally. Adél Terblanche claimed her second win of the Series as she came home in 22:58.

With only two races left in the Series, things are heating up and race 3 is sure to bring more exciting times next week at Segwati.