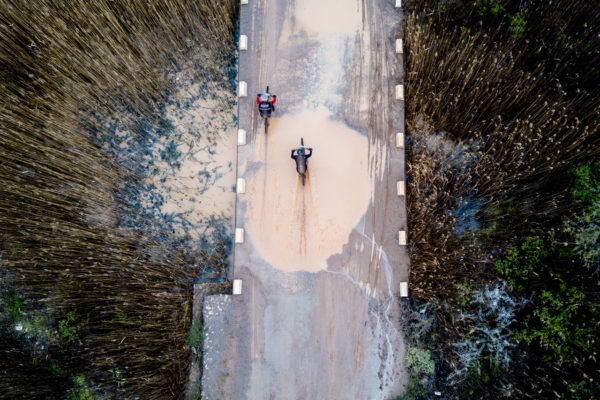 Stage One was a mud fest

Cold and wet conditions could not dampen the spirits of nearly 300 mountain bikers in McGregor this past weekend. The seventh edition of the three-day Ride2Nowhere was a huge success, despite the unseasonal (but highly welcome) torrential rain.

As in the past, the 2018 edition featured various options across the three days, with a short (40km) and long (60km) route per day as well as solo and team categories for mixed, women and men’s teams. The short routes were open to riders of 16-years and older. While that sets this event apart from many other stage races in the country, a central theme emerged (once again) throughout the weekend: The vibe makes this kind of event and the market for ‘lifestyle’ mountain bike events is growing.

Stage one was a wet and wild day affair. Heavy overnight rain (and in the days preceding the event) necessitated that route designer Con Viljoen shorten the route by about 10kms, cutting out some of the most dangerous sections.

The riders took it on the chin (and legs and back) and soaked up the conditions (ie mud), however.  Erik Kleinhans, who won the team race in 2018 but came back to just have a fun weekend of riding with friends summed up the day. “Firstly, I think everyone from the Western Cape obviously loves the rain. It’s nice to ride in a bit of wetness,” he said.

According to Erik, due to the conditions the route rode slower in some sections than the stage of the Absa Cape Epic that used much of the same route during the 2018 instalment. But then, that was just fine with him. “We came here to enjoy the weekend, not to race and I think there is a big future for events like this. We came out to have fun on the bike and off.”

Cherise Willeit who tackled the mud with husband Benno, had a great day out in her first event since having a second child. “Today was very much a case of either the glass was half full, or half empty,” she commented. “For us it was definitely half full – we had a great day out.”

“We don’t get to ride in conditions like this in South Africa very often, so I really embrace being out on the bike. It was the first stage race for Benno and I together and we didn’t fight and we didn’t cry,” she joked. “Lots of slipping and sliding in the mud, it was really great.”

“I loved the atmosphere of the event, I really take my hat off to all the volunteers at the water points and all the marshals – it was really cold out there. Hats off to them, and everyone else that finished today.”

DAY TWO
68km, 1460m climbing
The sun came out and the spirits soared with the temperature on Saturday. The previous day’s rain once again resulted in a few reroutes just to keep things safe and, in the words of route designer Con Viljoen ‘lekker.’

One guy who really enjoyed the ‘lekker’ trails was Conrad ‘The Caveman’ Stoltz, on this his first Ride2Nowhere. “I was really surprised by the beauty out here,” he said.

“Having raced professionally since 1992, I’ve only ever done three winters in South Africa, so haven’t gotten to see much of the country in winter. So it’s really nice to experience the beauty of the area with the plants flowering,” he said.

The Caveman’s legendary off-road skills were perfectly suited to the trails on the day. “It was just a perfect day out with snow on the mountains in the backdrop. The mud made for a bit of fun, some slip-and-slide here and there, but nothing too bad and it should dry out nicely for tomorrow,” he concluded.

Day three was a ‘day of days,’the perfect way to cap it off. While the day dawned the coldest of the three, there was not a cloud in the sky, revealing snow-capped peaks in the surrounding mountains. The trails had drained and conditions were perfect for riding.

“Is probably some of the coolest trails I’ve ridden,” said Bigshot Media’s David le Roux, who is usually behind a camera on the back of a motorbike, but chooses this event as one of the very, very few he rides every year. “I’ve ridden and worked on many, many trails and these are some of the finest. Whether jeep track or singletrack the routes are just really well thought-out by Con,” he said. “That, along with the intimate, chilled vibe of the race really makes it special.”

While the vibe is why the majority of the field return year after year, at the sharp end the boys and girls still kept the throttles open.

At the sharp end it was a consistent performance by Johan Coetzee, to claim the solo overall victory from Renier Botha, with just one second separating the two after three days. Gideon Van Der Berg rounded out the podium. The women’s solo category was won in dominant fashion by Anneke Hanekom with three stage victories. Nicola Walker was second and Kari Gillett third.

In the team category Nichol Jordaan and Heinrich Coetzee (Winemakers) took the overall title from Niel Louwrens and George Louwrens, with Dawie De Villiers and Jampie Vloktaking the third step. In the women’s team category on the long route, Jeanie de Villiers and Marleen Lourens kept Saskia Van Der Merwe and Courteney Webb at bay for the overall title, while Ilse Viljoen and Jana Kruger rounded out the podium.