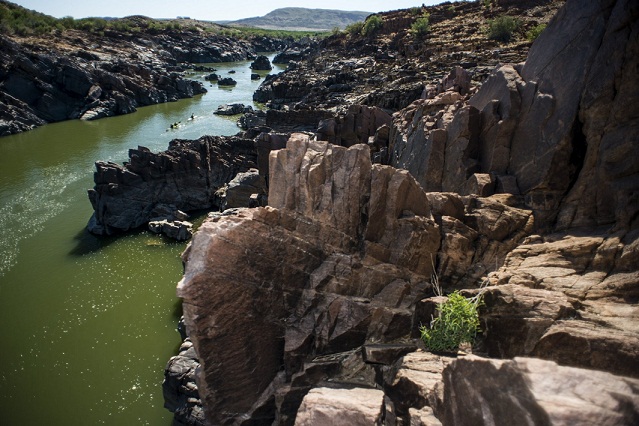 Paddlers are heeding the call of the mighty Orange as they head for the Northern Cape to take part in the Green Kalahari Canoe Marathon from 7-9 August. – Photo Jacques Marais

The 2014 Green Kalahari Canoe Marathon (GKCM) promises three days of non-stop paddling action from 7 – 9 August. Next weekend a competitive field of paddlers will take on the mighty Orange River, vying for a massive R450,000 prize purse. Staged in the Northern Cape Province on a 100-kilometre stretch of the Orange River between Upington and Augrabies, this three-day kayak race attracts competitive paddlers. They are enthusiastic in their praise for the race, the Orange River and the Green Kalahari region.

Last year Cape-based paddler Jasper Mocke won the men’s K1 race. “This new race is definitely very exciting and it will remain so for the next three to four years due to the unpredictability of the river,” he says.

“Paddlers also have different options to explore during each stage. I really enjoyed the final stage as the river was narrower, fuller and faster and you had to paddle harder.”

Race organiser Gawie Niewoudt is tight-lipped about this year’s conditions, which can be affected by rainfall upstream or a dam release. “For every 50 centimetres that the water level drops or rises, the river changes dramatically,” he explains.

“Upfront we expect to see Thulani Mbanjwa and Sbonelo Zondi. They’re both Dusi winners and are exceptionally strong runners during portages,” says Niewoudt. “The Czech pair will be strong and it would be worth keeping an eye on Louw van Riet, who is paddling with Luke Stowman. Louw won a gold medal at the Berg River Canoe Marathon two weeks ago. Graeme Solomon and Ivan Kruger will be challenging for the win too.”

The Green Kalahari Canoe Marathon is hosted in conjunction with the Northern Cape Provincial Department of Economic Development and Tourism as part of their ongoing campaign to promote the Province as the adventure and extreme sports capital of the country.

According to Nieuwoudt, the international entries will definitely boost the profile of the race.

“This is an incredible opportunity to grow the event and to promote the race on a global platform; international competition always adds to the competitive spirit of the race. The scenery and sheer magnificence of the river are really impressive and we find that competitors become keen ambassadors for the race. The significant amount of prize money through all the categories definitely also makes it worth their while to make the trip to the Northern Cape. The hospitality of the people and all the great tourist offerings also entice them back again and again,” says Nieuwoudt.

o After Stage 3 there will be a wildwater sprint race