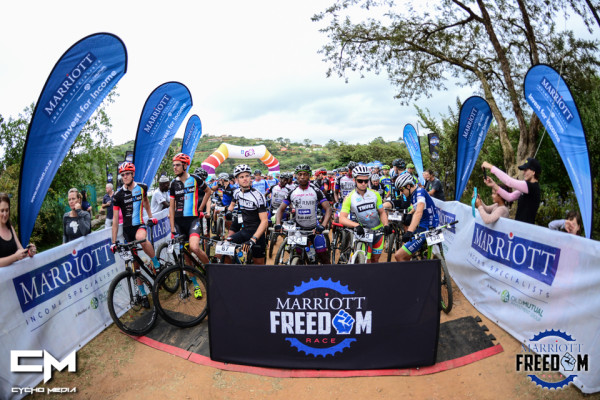 This past weekend over 480 mountain bike enthusiasts took part in the 2016 Marriott Freedom Race, an exciting mountain bike event that celebrates the 26th anniversary of Nelson Mandela’s release from prison.

Andrew Hill and Tyronne White had some tough competition from Brandon Stewart and Travis Walker as well as Matthew Wilkinson and David Low, who were eager to take on the tough 55km first day route. The rest of the team field was eager to depart the eNanda Adventure Centre and take in the sights and sounds of the beautiful Inanda Valley.

The Marriott Freedom Race, sponsored by Marriott Asset Management, accommodates both serious cyclists and individuals looking for a fun day out. Riders can choose between a two day, two person team ride which covers +/-60kms per day (120km in total), or a one-day individual ride over a shorter course of 40kms.

The lead pack of six hit the testing trails at precisely 7am and was immediately put to the test with some action-packed single track right. This newly built single track by the Durban Green Corridor and GO! Durban was constructed between the eNanda adventure Centre and the Inanda Dam wall. The first section of single track did little to break the pack but the pace showed by the first water table, where a thirty second gap opened up between Stewart and Walker and the leading four riders.

The trails on day one took the riders in and around the community, with some beautiful single track right on the water’s edge. The two water tables on the route allowed the riders to refuel and catch their breath, while waiting for their team partners who might be lagging. Each team needed to stay within two minutes of each other during the course of the ride.

After a wrong turn at the forty-two km mark by Hill and White, Low and Wilkinson took the lead and held off a strong chase by White and Hill until the five km mark. Here Hill took to the front with White in hot pursuit and they pushed to open the gap between Low and Wilkinson. Hill and White managed to keep ahead and won day one in a time of 2hrs07min13sec.

Day two started with some cool, misty weather in the Inanda Valley, which was perfect to keep the 480 team and forty km individual riders fresh for the tough day ahead. With only minutes between the top teams, the 108 teams were eager to get going up onto the Shembe Plateau, possibly the most scenic section of the two-day event. At 7am the team riders dashed out of the eNanda Adventure centre, some on weary legs, but still eager to take on the fifty-five km of mountain tracks ahead. At 8:15am the 270 forty km individual riders departed the eNanda Adventure centre eager to take on the shorter, yet just as challenging, route down the Umzimduzi river towards Durban. The finish for all competitors on day two was Suncoast, but between them lay forty km of exciting, heart pumping trails along the river’s edge.

Hill and White lead six man pack again on two and managed to hold off a strong surge from Stewart and Walker, who needed to make up almost two minutes from day one. However Hill and White managed to hold onto their lead and won day two in a bunch sprint down the line, clinching their second consecutive title.

Stewart and Walker claimed second place with Wilkinson and Low claiming third place overall. The ladies race was won by Brenda Potts and Sarah Van Heerden in a great time of 5hrs 16min 37sec. The first mixed team was won by Natalie Bergstrom and Gareth Cook in a time of 5hrs 14min 06 seconds.

For a full set of race results, check out www.finishtime.co.za