Hill and White in command after dusi2c stage one 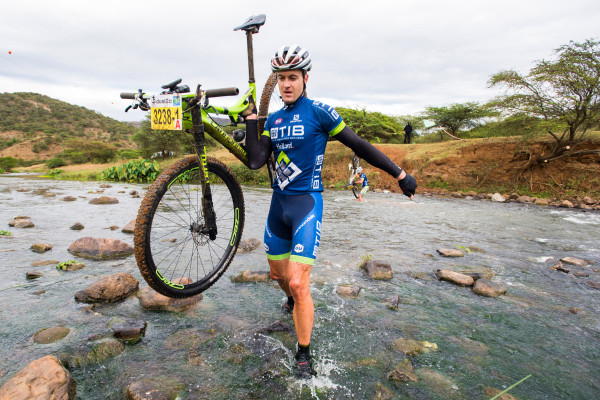 The Team TIB duo of Andrew Hill and Tyronne White managed to get themselves ahead early and they maintained that lead to the finish on stage one of the 2016 BSi Steel dusi2c from Camps Drift in Pietermaritzburg to Mfula Store on Saturday. Anthony Grote/
Gameplan Media

Mfula Store – The over 400 riders were greeted to some sublime conditions at the start of the fourth edition of the 2016 BSi Steel dusi2c on Saturday and the favourable conditions were exploited brilliantly by the pre-race favourites Andrew Hill and Tyrone White who have a three minute lead going into the final stage on Sunday.

A spot of overnight rain gave riders some much-appreciated respite from the dust that has been a result of the lack of rain in the region and the respite gave the riders some top conditions for riding and the pace at the front of the race was a testament to that.

Despite opening up a significant gap fairly early in the stage Team TIB would have been wary about the Team Safire pair of Warren Price and Trevor Rowe who never relented throughout the day’s ride and finished just over three minutes behind the eventual stage winners.

“You have to put pressure on the guys from the word go and today was no different,” three-time defending champion Andrew Hill said at the end of the stage.

“We set that early pace because we knew that we could really break the guys in the first bit and then settle into a good rhythm but the overnight rain had made the track a bit snotty which meant it wasn’t that easy.”

The bunch started stretching quite early in the race as the frantic pace starting fracturing the group also Hill understood that with the slippery conditions it was important that him and White got a lead early.

“Going through Mountain Rise we managed to get clear of the guys but I took a tumble on the first single track which wasn’t serious but after that we didn’t see the guys which meant that our plan of going hard early was justified,” added a satisfied Hill.

For White, the Valley of a Thousand Hills is not a foreign region however he is not as knowledgeable as his partner but he had a fair idea of what to expect going into his debut dusi2c experience – one that he really enjoyed.

“I have ridden a bit through the Valley with Andrew on training rides so I do have an idea of what to expect down here but this riding is just unreal!” White commented.

“It’s proper mountain biking and it is really something special to be able to ride through here in a race.

“The first 20 kilometres was pretty treacherous and you had to be on your toes and not take too many risks because we didn’t want to end our race with a silly crash early on,” he added.

Price and Trevor Rowe had a solid day in the saddle as they managed to keep the leaders in their sights as they ended in second place going into the final stage of the race.

The RMB Change a Life 1 duo of Ndumiso Dontso and Sipho Kupiso managed to hold off their Change a Life counterparts Bongmusa Zikhali and Siyanda Masango to claim the last podium spot going into the final stage on Sunday.

The mixed category honours were going to be a hard fought race with Sani Racing’s Bianca Haw and Andrew Houston fighting it out with Merchants’ Jeannie Dreyer and John Ntuli however it was the former that gained the ascendancy early and never relented their lead to take the stage honours by just over five minutes.

“It was a bit unfortunate for John and Jeannie who had to pump up a tyre on the start line which meant that they lost a bit of time,” Houston said after the stage.

“We did a practice ride a few days ago so we knew where we needed to push and that helped us today I’m sure so it helped us after we got a gap early.

“We have a good lead but we know that John and Jeannie are really strong riders so making sure that we are with them and stay out of trouble the whole way to Durban!” expressed a satisfied Houston.

The Merchants outfit will be chasing hard on the final stage and have all but sewn up second spot as they go into the final stage with a thirteen minute advantage over the Parker-Dennison pair in third place.

The race for the final spot on the podium in the mixed category will be an interesting one as the under-estimated pairing of Owen Gandar and Tamika Haw hunt down the Parker-Dennison’s, who have an advantage of less than a minute.

The second and final stage of the 2016 BSi Steel dusi2c sees riders take on a 60km stage from Mfula Store to Blue Lagoon in Durban.

For more information go to www.dusi2c.co.za