Hill and Wolhuter lay down daunting dusi2c day one marker 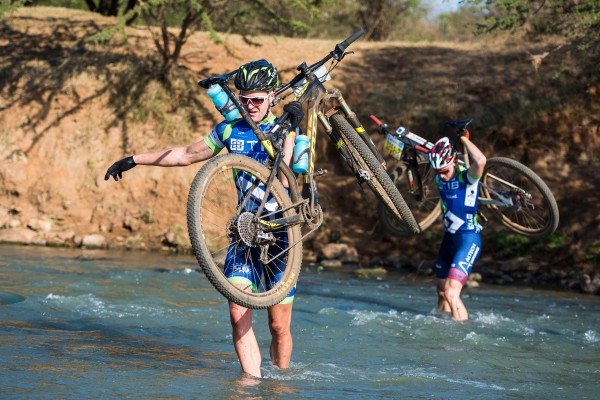 The day belonged to the Team TIB pair of Andrew Hill (front) and Chris Wolhuter who powered to a four minute lead at the end of the opening stage of the 2015 BSi Steel dusi2c on Saturday at the Mfula Store. Anthony Grote/
Gameplan Media

Mfula Store – As was expected the first day of the 2015 BSi Steel dusi2c was going to be a case of the majority chasing down the pair of Andrew Hill and Chris Wolhuter who lived up to their favourites tag as they rode to a ominous four minute lead in the men’s race whilst the mixed category took centre stage with three pairs in the top 10 as Bianca Haw and Andrew Houston led the bunch after the first day.

The leading pair were happy with the way their opening stage went and with Hill being a two-time champion and a man with a fair amount of local knowledge he feels that that should stand the two in good stead going into the second and final stage of the race on Sunday.

“I have been in this position before and I think that might put us at an advantage after today,” Hill said. “We had a solid day today and I think knowing the trails helped us quite a bit considering that the GPS is only accurate to 100 metres so it can get tricky.”

“Tomorrow is a flatter day but I think if we can just keep it together and stick with the guys that are behind us then we should be ok,” he added.

Hill’s Team TIB partner Chris Wolhuter is from the Western Cape however he has adjusted well to the tracks in the Valley of a Thousand Hills and he does not see them as too foreign although he relied a bit on the knowledge of Hill.

“I have done a bit of riding in the Valley but having Andrew to navigate us through is such a benefit and he was able to tell me what was coming up so I knew what I could expect.

“With that said it was a little tougher than I expected!” Wolhuter added.

58km stand between the Team TIB duo and the 2015 title however Wolhuter knows that there is a chance that anything can happen between the start and finish.

“We need to just be careful tomorrow because we only have a lead of just over four minutes and if we get a puncture of something then we will be under pressure,” he mentioned.

There is a bunch of three RMB BSi Change a Life teams chasing the leaders and it looks like the Martin Dreyer inspired Academy will claim two of the three spots on the podium however the chasing pair of Trevor Rowe and Warren Price who are primed for a repeat of 2014 where they stole a tie for third on the second day.

The leading mixed team includes the current African Cross Country champion Bianca Haw who along with her partner Houston managed to avoid any issues throughout the day and along with the Thule pair of Jeremy Thomson and David Leiman managed to keep themselves out of trouble and into a five minute lead in the mixed race.

“Everything went to plan for us today and we managed to avoid any technicals which set us up nicely,” Haw mentioned after the stage. “Housty was really good navigator because he was the only one in the group with a Garmin!

“It was a nice bunch of people in our group and we had a good time out there although we have got quite a bit of work to do tomorrow with the other two teams not too far behind us but if we all start together we will just try and make sure we are just ahead to the end.”