Hill and Wolhuter unstoppable at 2015 dusi2c 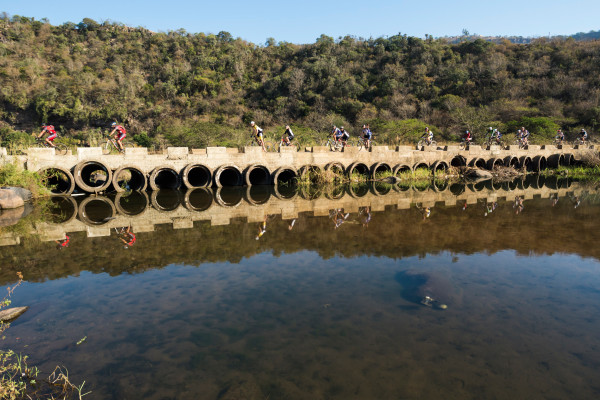 Riders had less climbing to endure but had some tricky sections of track aongside the Mngeni River during the second stage of the 2015 BSi Steel dusi2c from Mfula Store to Blue Lagoon on Sunday. Anthony Grote/
Gameplan Media

Blue Lagoon – With a circumspect four minute lead overnight at Mfula Store Team TIB’s Andrew Hill and Chris Wolhuter put in a masterful stage two performance as they built another seven minutes onto that advantage to take the overall 2015 BSi Steel dusi2c title whilst in the impressive mixed race overnight leaders Bianca Haw and Andrew Houston held their nerve to clinch the mixed title at Blue Lagoon on Sunday.

For Hill it would be an unprecedented hat trick of titles and he is the only rider who can claim wins all three editions of the race however he was quick to point out that he and Wolhuter had a lot of work to do going into the final stage of the race.

“There was quite a bit we still had to do today,” the most decorated dusi2c rider mentioned. “There were a few changes to the route, although minor, and a few navigation errors on my behalf cost us a couple of seconds here and there as well as my handle bars coming loose made it a bit more difficult.

The pair had a set plan in mind of how they were going to remain ahead through the final stage with the expected pressure coming from the impressive RMB BSi Change a Life crews as well as the resurgent Team Safire duo of Trevor Rowe and Warren Price but Hill knew that they had a good enough advantage to play the more conservative game.

“We weren’t really put under pressure today but we knew that we had to play it safe and get to the finish in one piece whilst avoiding any mechanicals,” Hill mentioned.

With a four minute buffer at the end of the first day Chris Wolhuter believed that they would be able to hang onto their advantage and ultimately the pair did more than hang on as they seven minutes to the overnight deficit.

“We felt confident in our ability. We were strong yesterday and Andrew knows the route well so could push harder and put pressure on the other guys and see how they responded.

“We put the others under pressure a few times and it gave us that advantage that you plan for and if something does go wrong then you have that cushion that you can use,” the Western Cape rider mentioned.

The Team TIB pair have now taken part in a number of races together and for Wolhuter being able to work off your partner as well as understand their abilities is an advantage and something that played out in their favour over the two days of racing.

For the RMB Change a Life Academy the 2015 dusi2c was unprecedented in terms of results with the Valley of a Thousand Hills residents recording four teams in top ten with Mzwi Smimango and Bongumusa Zikhali finishing in the silver medal position.

“We are really happy with the results we got this weekend,” Smimango said afterwards. “We had a great race and nothing went wrong for us!

“I just want to thank my partner for the race as well as all the people that are involved with the Academy and hopefully we can get stronger!” he smiled.

The Red Bull Seed’co combination of Houston and Haw was always going to be a tough one to beat and it proved to be more difficult than that as they rode to another stage win and the overall win despite issues early in the stage.

“We had a bit of an issue after I cracked the rim which caused a slow puncture but luckily it wasn’t too bad as I did the bombing and he did the plugging and we were back,” explained Haw.

Houston was the man on the front on the first day and remained there through stage two as setting the pace of the group meant that they were able to push for that extra time over the others, especially after the cracked rim.

“I was on the front only when the cameras were around,” Houston mentioned tongue in cheek. “We needed to have that advantage especially after we lost some seconds with the rim problem.

“The others got away from us on the tar road and we worked hard to catch them as we got them within the last two kilometres and stayed ahead.”

The ladies race was won in convincing style by the Michelle Squared team of Michelle Schlebusch and Michelle Powell who dominated the race to win by 35 minutes over The Windsor’s team of Jane Little and Fiona Butler.