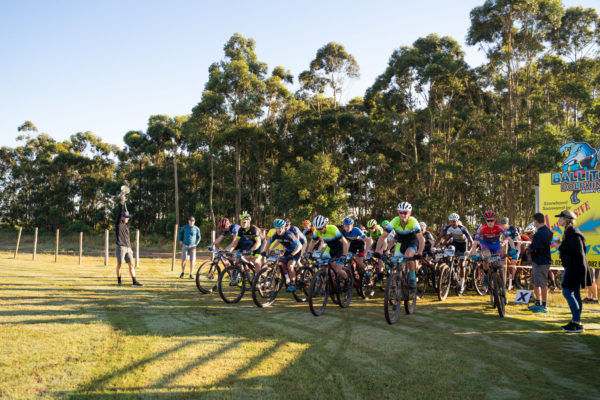 A last-minute decision to compete in the Holla Trails Sugar Rush Classic mountain bike race on Sunday paid off for Andrew Hill when he held off young Travis Stedman to claim a confidence-boosting win ahead of this weekend’s sani2c.

The Sugar Rush Classic is the fourth race in the Quattro ROAG Series powered by Momentum and Hill (Team Darkhorse Wheels insured by TIB) and Stedman (Steel and Pipes) were able to ride away from pre-race favourite Tyronne White when the winner of the previous three events had to stop and repair his tyre which developed a leak during the event.

The experienced Hill, who is still recovering after winning all seven racing stages of the recent 900km joBerg2c, and the 17-year-old Stedman built a lead of just over two minutes over the chasers before Hill managed to get the better of his young rival in the dash for the line.

White managed to fight back and claim third, a couple of seconds ahead of his Drive Train Academy teammate Andrew Johnson, with Sthembiso Masango taking fifth overall and finishing in the same group.

“It was a nice route with some well-prepared flowing single track,” said Hill. “It was a pity Tyronne (White) had tyre issues because he would have been with us at the finish I think. I am not sure what happened but it seemed to be a valve issue because his tyre lost air and he had to stop to bomb it (reinflate using a compressed air canister).

“I did sit up and slow the pace when I heard Ty was off the group with a puncture, but as the group got bigger and I realised Ty wasn’t coming back I knew I’d have to contend with more riders as we approached the first single track section

“I was not sure if I was going to ride. I was a bit tired and needed some rest after joBerg2c and I spent the week humming and hawing about doing it. On Saturday I decided to do the race. I had a session on Saturday and felt OK and then had a decision on Sunday to either do a hard ride on my own or go and do the race.

“I didn’t really know what to expect from my body after such a big load of racing heading into a quick fast race like this.

“It was nice to race with Travis. He was very strong and competitive.”

Saturday’s 18km trail run was a triumph for Sylvester Maindi with Linda Zondi taking second, less than 30 seconds behind the winner, while Sphelele Gumede filled the bottom step on the podium after finishing a minute further back.

The women’s trail run saw Apiwe Gaga secure her first win of the year after three second-place finishes and she has extended her lead in the Quattro ROAG Trail Running Series powered by Momentum. Tarryn Lopez was a surprise in second while the defending series champion, Sarah Gray, finished third.