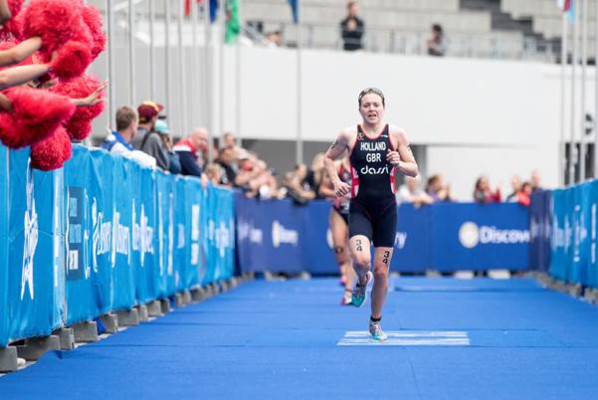 Under foggy skies and a slight chill in the air, Great Britain’s Vicky Holland announced her return from injury in style with her first ever World Triathlon Series win. A late surge on the run gave the Brit just what she needed to hold off the USA’s Katie Zaferes and Switzerland’s Nicola Spirig. With silver, Zaferes moved into the top spot on the Columbia Threadneedle Rankings.

Zaferes got her day started with a bang as she zoomed to the top of the swim pack and led the 48-deep field around the one-lap 750m swim, which was shortened due to water temperatures. Brazil’s Pamela Oliveira joined the American as one of the first athletes to emerge, with Great Britain’s Helen Jenkins also seemingly un-phased by the chilly temps with a strong position out of the Atlantic.

Together with Flora Duffy (BER), the foursome powered away on the first of eight bike laps in an attempt to create distance between themselves and the powerful Spirig and Sarah True(USA). But with the reigning Olympic gold medallist back racing for the first time in two years, the gap was short lived. At the end of the second lap, the distance was diminished and a 27-person group was created.

Despite holding down a part-time job while also training after graduating from Oxford University, South Africa’s Mari Rabie showed her tenacity as she dominated the front of the bike pack lap after lap alongside Duffy and Spirig.

Spirig came roaring into transition and hammered out in front with Vendula Frintova (CZE) and Haug in the first half kilometer of the 10km run. Holland picked up the pace and reeled in the ladies, which drug the rest of the chase up making them a half-dozen deep pack on the first of four laps.

Young German Sophia Saller took her spot at the front of the run pack and held onto it for half of the four-lap run, alongside Holland. The group remained together until the fourth lap with Holland gunned ahead in a well-timed break. The final kick was just enough to keep Zaferes and Spirig away, giving her her first WTS gold.