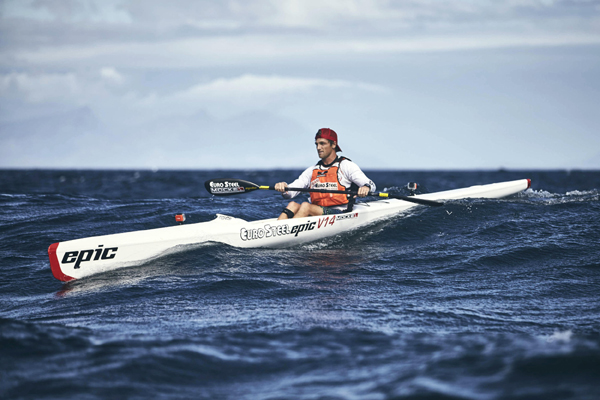 Fish Hoek surfski star Jasper Mocké is eagerly preparing for the Peter Creese Memorial and Cape Point Challenge surfski events which take place in Fish Hoek over the next two weekends as the cream of the world’s surfski stars annually descend on the South Peninsula at this time of the year.

The Euro Steel/Epic Kayaks star is eager to make an impact on both events, particularly the Cape Point Challenge, and is buoyed by the forecast of moderate winds and manageable ocean conditions that will clearly favour the seasoned surfski experts, unlike the recent World Series event, the Perth Doctor, that was left without any downwind assistance at all.

“At this stage the conditions look really fantastic!” Mocké enthused from his base in Fish Hoek. “We have had some tough Cape Point Challenges in recent years so to have one with a light South Easterly will be great!”

“The thing with Cape Point is that you have to go into the wind for half of the race, so you want enough wind to give assistance from the point home but not too much for the first half. It’s quite rare to get such a perfect balance though.”

Despite having completed eleven consecutive Cape Point Challenge in the race’s 23 year history, Mocké is hunting for a maiden race title having placed second in his last three outings.

Desperate for a win, Mocké has no doubt that it will take an incredible effort to achieve his goal this year.

“We are in the era of probably the greatest marathon paddler ever, Hank McGregor and so to beat him next weekend will be no mean feat.

“I count myself privileged to have been on the podium several times previously and to repeat that again this year will be cool, but it’s the win I’m after.”

Aussie star Brendan Rice, a familiar face on the South African circuit, will however be out to cause an upset and Simon Van Gysen, Ken Rice and Stuart MacLaren will head up the South African charge, alongside with Mocke and McGregor.

European champion Yannick Laousse (FRA) has too been in Fish Hoek, preparing for a month for the event, and will undoubtedly be a force to be reckoned with as well.

“There is no shortage in terms of the depth of field of the pros; this is going to be one of the most closely contested Cape Point Challenge’s that I have done,” said Mocké.

“Perhaps like 2012,” he added, referring to the year that seven paddlers were together in an end-sprint and all finished within 15 seconds on each other.

After grinding his way into fifth place in hot and flat racing conditions at the Perth Doctor recently, Mocké has overcome the jet-lag from the arduous journey home and has enjoyed preparing on home waters.

It has been a busy racing schedule for the Cape ace during the past three months but Mocke will have home ground advantage as few know the conditions around Cape Point better than he does.

“Yes, racing so much does wear you out a bit, but it also keeps you sharp.

“Every weekend you have an opportunity to measure yourself against the world’s best and if you can’t shape up, then ship out!” he added. “The Cape Point Challenge will be one last big push before some time off so I’ll be bringing my best”.

“It is the toughest one day race in the world and you have to be a complete paddler to win this.”

“All the top guys are equally as skilled though, so it is going to be a tough race!” he added.

The Cape Point Challenge takes place on Saturday 17 December. More information can be found at www.capepointchallenge.co.za.