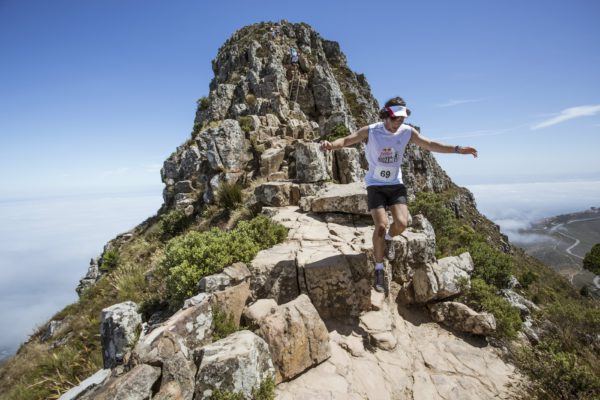 CAPE TOWN – Excepting maybe the flatter, slightly bigger mountain to its Southeast, Lion’s Head is Cape Town’s most iconic mountain. A stroll around its base, or hike (or run) to the peak is a must-do on any visiting tourist’s itinerary. The 360-degree views from the top – down into city bowl to the East, Southwest along the 12 Apostles and out over the Atlantic are hard to rival.

For the fifth year in a row, this icon will play host to one of the most high intensity trail-running events on the South Africa calendar, Red Bull LionHeart. The 2016 event will take place on 22 October 2016, and qualification is open.
The race concept was the brainchild of Ryan Sandes who wanted to create a fun, innovative event where he could share the mountain with as many people as possible and formalise (without compromising its core roots, of course) #TamingTheLion, the underground time-trial up-and-back from the SanParks hut.
In keeping with the spirit of evolution on the event, 2015 saw even more runners compete on race day, with the top 100 men qualifying to race, based on the Strava qualification leaderboard. On race day, those who made the cut-off of 33-minutes advanced to the main event, with the top half racing for the Elite title and the bottom half, the Intermediate (a category which was introduced in 2014).
Last year saw something of a changing of the guard, in the absence of three-time defending champ, young gun Johardt van Heerden running a blazing 0:28:50 to take the men’s title, on the up-and-down 3,7-kilometre route, while.
The top 30 women also qualified based on Strava leaderboard and it was newcomer Hayley Preen who claimed the title in a time of 0:34:12, beating 2012 winner Megan Mackenzie into second. Two-time defending champion Landie Greyling did qualify for the final, but opted not to run, citing a niggle in her knee.
While the knockout format race on the day will be on the route up-and-down Lion’s Head, the qualification route is the same as the past two years, around the base of the mountain on the track known widely as ‘Pat’s Track’.  The route offers fun but technical singletrack with 164-metres of climbing over the 3,3-kilometre route.
The mountain itself is special too, home to three separate types of fynbos. Most of Lion’s Head is covered in endangered Granite Fynbos, which fades into Peninsula Shale Renosterveld (critically endangered) on the lower slopes towards Signal Hill in the north. On the summit is a tiny patch of endangered Sandstone Fynbos, a different ecosystem that is also found nearby on the top of Table Mountain.
Entries for Red Bull LionHeart are now open, head over to http://www.redbulllionheart.com/ for more info.
featured Lion’s Head Red Bull LionHeart 2016-09-26
Tiaan Pretorius