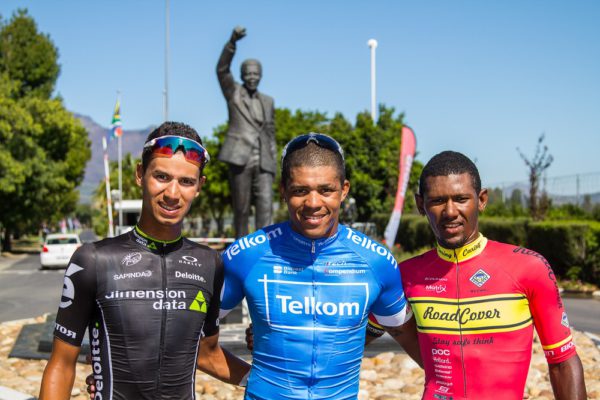 Jayde Julius (left), Nolan Hoffman (centre) and Clint Hendricks pose in front of the statue of Nelson Mandela after a stage of the Bestmed Tour of Good Hope. Photo: Warren Elsom/Capcha Photography

The Bestmed Tour of Good Hope will have a direct link to one of the world’s most iconic figures when the stage race is hosted by the Drakenstein Correctional Centre situated between Paarl and Franschhoek next year.

The facility, previously known as the Victor Verster Prison, made international headlines on February 11, 1990, when Nelson Mandela took his first steps to freedom through its gates after 27 years of incarceration.

It will act as the Tour of Good Hope’s race village from March 5 to 9, with an international field of cyclists starting and finishing under the famous Madiba statue at the entrance to the prison.

The correctional centre’s communications manager Manfred Jacobs, who has worked there for over two decades, said the staging of the Tour of Good Hope, presented by the City of Drakenstein, would tie in with the 100 years’ celebration for Mandela.

“Next year, Madiba would have turned 100 so it is a special occasion,” he said. “We are definitely looking forward to hosting the race and it’s a huge boost for us to have the top local and overseas riders here.

“We want to build on the legacy of Madiba, which is about getting people together. If we can do it through sport, that’s even better because of his belief in the power of sport.”

Jacobs said they all had many special memories of Mandela, who spent his last 14 months at Victor Verster, but one lesson from him always stood out.

“The one thing that I always tell people is that he taught us that big doors hang on small hinges. That means you need not be the most significant person around, but if you can still add value you are important.

“And that’s what we try to do here, to add value, not only to the inmates but also to the public we are serving.”

Jacobs said they had been involved with the Bestmed Tour of Good Hope previously and they had the facilities and space to act as the race venue.

An indication of their organisational capabilities, he added, was the 27 For Freedom road running race they held annually in February to celebrate Mandela’s release.

“We have around 10 000 athletes in this run so we are geared to host big events,” said Jacobs.

“We are really looking forward to the tour because it is one of the prime races in the Cape Winelands area and any part we can play in that would be fantastic.”

ASG Events’ operational manager Darren Herbst said they were delighted with the new option and felt it would work really well for the five-day event.

“We have put in a lot of effort to establish this race on the calendar and the City of Drakenstein have assisted us greatly after coming on board last year,” he said.

“The Victor Verster played such an important part in Madiba’s life and the new venue will encompass a number of things, such as cyclists riding past the house where he lived, so it should make for a memorable celebration.”

He added that the crossing of the public road outside the facility was one of the major factors they had solved from the previous year when the race was hosted by La Paris Estate while starting in front of the prison.

“With the start and finish inside the centre, that issue has been removed,” said Herbst.

“There are ample parking and wonderful facilities that will ensure a hassle-free experience for the participants. It is the perfect setting to reproduce the five-star race village for which the tour has become known.”

The Tour of Good Hope will cover a total distance of 490km in the Cape Winelands.