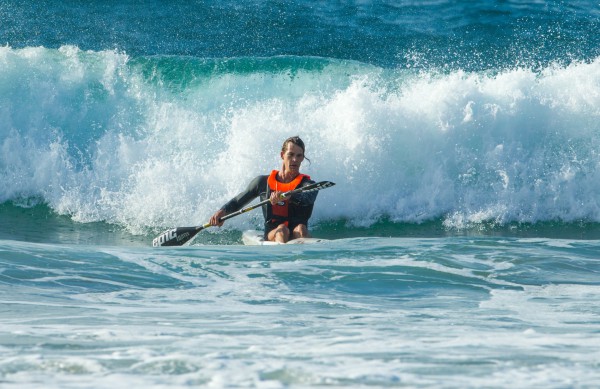 Scottburgh – KwaZulu-Natal’s paddlers got the 2015 FNB Durban Downwind Surfski Series underway on Sunday with the Halfway Toyota Scottburgh Classic which saw Matt Bouman and Michelle Burn clinch the men’s and women’s titles respectively while the rest of the field soaked up the day’s spectacular conditions.

Former international surf lifesaving Ironman sensation Wade Krieger went to the front early on before Bouman (Epic Kayaks/SMG) took control of proceedings at the start of the penultimate lap and charged away to claim a comprehensive victory.

“That was probably the most exquisitely beautiful day planet Earth has seen in the past millennium!” Bouman described colourfully.

“The conditions were probably the highlight of the day because unfortunately the racing wasn’t very exciting.

“It was long, hard and arduously boring but – in a strange, twisted way – I guess it was also quite nice,” he said curiously.

“I think most people’s highlight must have been turning around the rocks, floating over the aqua coloured water and feeling like you were at some kind of a disco for half an hour while they headed out to the turn buoy; conditions really were pretty surreal!” he added.

Paddlers head out through Scottburgh’s surf early on Sunday morning at the start of the Halfway Toyota Scottburgh Classic, race one of the 2015 FNB Durban Downwind Surfski Series. – Topfoto/
Gameplan Media

With regular top performer Hank McGregor (Jeep Team/Epic Kayaks) attending the weekend’s national Canoe Sprint trials, Bouman was left to race against the clock once he broke free of his nearest challengers.

“I’m training pretty hard at the moment as I work towards my year’s bigger picture plan but these races still fit into that plan really nicely and it’s great to finish the week off with a good, tough session like this.

“Hopefully we get some wind for the rest of this downwind series though!”

Try as he may, Krieger could not reel Bouman in and had to settle for second place with Gene Prato, Barry Lewin (Jeep Team/Varsity College) and Irvin Dixon rounding out the top five while Bailey de Fondaumiere claimed the junior boys race honours.

“Today was a great day, a great race and it was great to come to a new venue away from our regular base in Durban’s bay,” said Krieger.

Amanzimtoti flyer Michelle Burn (Fenn Kayaks) cruised to an unrivalled victory in the women’s race as she looked to use the FNB Durban Downwind Surfski Series opener to build towards her longer assignments that loom on the horizon.

“The race was a bit further than I’d anticipated so it was quite tough but it was good preparation for the longer races like next weekend’s Seabreeze Build it 5 Beaches and the Mauritius Classic that is coming up soon,” said Burn.

“It was a bit disappointing more girls weren’t able to make it to the race and their absence meant I had to look to race against the guys.

“I got into a decent bunch from the start and we all worked together quite nicely but while there runs in both directions, you had to work really hard to get onto them so it was still quite a tough paddle.”

Being a South Coast local herself, Burn thoroughly enjoys participating in the precious few races on the calendar in her home waters and the Halfway Toyota Scottburgh Classic was one she was not going to miss, particularly as the organisers offered paddlers complimentary boerewors rolls and beer after the race.

“I really love paddling down here at Scottburgh because it’s always a great race and the surf turns always make things a little more exciting and break the race up quite nicely.

“Today was also such a classic day and to get a few boerie rolls at the end was also great so a big thanks to Scottburgh!” said an appreciative Burn.

“We couldn’t have asked for better conditions for the course we had set here with the surf ins and outs, which everyone seemed to love!” said race coordinator Colin Simpkins.

“It was an absolutely superb day and a big thank you to the paddlers and our sponsors – Halfway Toyota especially – for their support!” he added.

The Seabreeze Build it 5 Beaches race, race two of the 2015 FNB Durban Downwind Surfski Series, takes place on 20 or 21 June. The final race date and venue will be announced on the series’ Facebook page on Thursday while more information can be found at www.durbandownwind.co.za