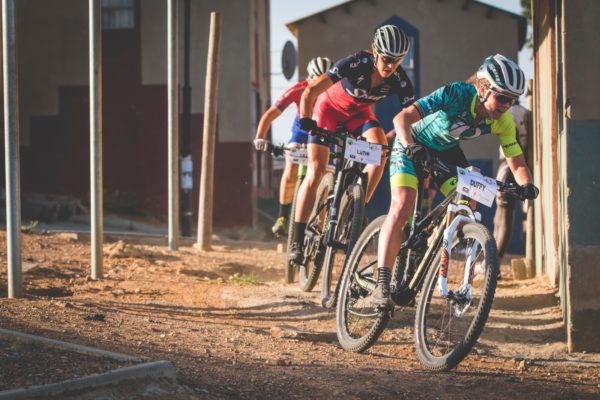 The festival of mountain biking which is the MTO Champions Race took place in Kayamandi, Stellenbosch, on Wednesday the 15th of March. The closely contested racing saw Xterra and ITC Cross-Tri World Champion Flora Duffy claim the win in the Elite Women’s race, while Swiss star Nicola Rohrbach won the Elite Men’s race.

The action got underway with the Future Champions Races, where the boys and girls competed in under fourteen and under eighteen age groups. Both age group categories were dominated by the Penfold brothers with older brother Jamie taking the under eighteen race win over Michard Meets while his younger sibling Aiden held off Krige van der Vyfer for the under fourteen category win. In the girls categories the two young ladies brave enough to race wheel-to-wheel alongside the age group boys, Danielle Barnard and Mia de Villiers, were rewarded with prizes from Specialized as Barnard won the under fourteen girls race and de Villiers the under eighteen girls. Though they were the only female riders in their races, both out raced many of the boys and were worthy prize winners.

Following hot on the heels of the age group cross-country races, for the first time at the MTO Champions Race, were the BMX races. The field was limited to a girls’ final, and two boys’ qualifiers and a final. Each race saw four riders go head-to-head with BMX World Cup commentator Max Cluer at his animated best announcing the action. In the girls’ race Milani Dingana took the win while in the boys’ race Zizo slowed on the final roller allowing Lakanya to sneak past and claim victory. 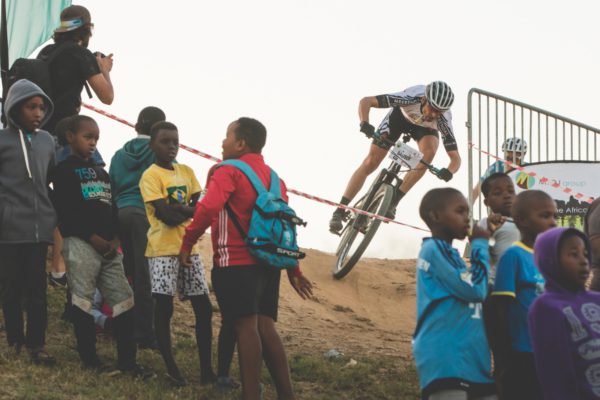 Though Christoph Sauser might not have secured his customary place on the MTO Champions Race podium this year he is undoubtedly in fine form leading into the Absa Cape Epic. Photo by Ewald Sadie.

With the age group racing out the way it was the turn of the Elite Women to take to the course. And what a route it was too. Starting on the Kayamandi Sports Fields the MTO Champions race got underway with a lap of the bumpy grass rugby field before heading up the embankment towards the songo.info clubhouse, from there the route twisted into an urban XCO route cutting through the dusty streets of Kayamandi – either climbing or descending as the suburb is situated on the steep slopes of Pappagaaiberg. The final descent took the riders back down onto the sports fields before a series of u-turns, cordoned off by event fences, forced them to reduce speed and then accelerate again for the sprint down the start/finish straight.

The women’s field was led out by Adelheid Morath, of Germany, before, part-time Stellenbosch resident, Bermudian Flora Duffy took to the front. Morath’s Absa Cape Epic and Team Spur partner Ariane Lüthi was the only rider to match Duffy’s relentless pace when the Xterra star started to accelerate in earnest. Lüthi had outmanoeuvred Duffy in the 2016 MTO Champions Race, but the Swiss XCM Champion could not repeat that trick this year. Having finished third and second in the previous two editions Duffy was eager to finally reach the top step of the podium. Without the stress of the Cape Epic looming ahead of her next week Duffy could afford to push a little harder than her rivals and in so doing could distance Lüthi leading into the final lap. Luthi crossed the line in second, happy with her final pre-Epic work-out, while Candice Lill was third – but not without drama as a dog wondered out into the route ahead of her on a descent, forcing her to take evasive action. Fortunately she avoided the collision and both rider and canine escaped without injury. 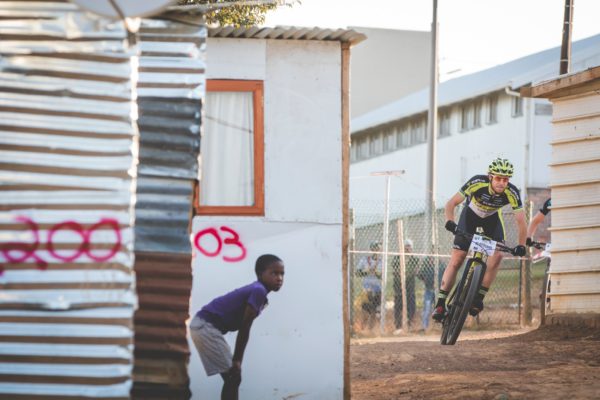 Stellenbosch local and long-time supporter of songo.info Erik Kleinhans in action during the 2017 MTO Champions Race. Photo by Ewald Sadie.

The Elite Men’s race featured arguably the strongest field ever for an MTO Champions Race, with 2012 Olympic Champion Jaroslav Kulhavý anchoring the star field which also included his Absa Cape Epic partner and songo.info co-founder Christoph Sauser; along with their young Specialized teammates Simon Andreassen, and sporting the rainbow stripes of a reigning world champion, Sam Gaze. The pace was furious from the off, and the men blazed through two laps of the sports field in no time before starting the climb to the club house at the end of their third lap. The kilometre of flat but bumpy grass riding had done little to spread the field and a peloton of riders, led by Gaze jostled for position on the steep grass slope before funnelling through the event barriers and into Kayamandi’s streets and alleys.

Gradually a lead group fought their way clear. Nicola Rohrbach, Gaze, Kulhavý, Andreassen, Alan Hatherly and Simon Stiebjahn jockeyed for position at the front, taking turns to hurt each other by setting a ferocious pace. Behind them American XCO Champion Howard Grotts was biding his time, getting stronger as the race wore on. The first of the leading group to drop back was Andreassen as a broken rear derailleur put pay to any hopes of defending the title he won in 2016. Then the race’s early protagonist, Gaze, was put in difficulty by Rohrbach and co. The New Zealander had crashed in training the day before and the relentless attacks were taking their toll on his battered body. Meanwhile Grotts had stealthily made his way into the lead group and was taking turns with Rohrbach to work to distance Stiebjahn, Kulhavý and Hatherly. After thirty minutes of frenetic action, cheered on by a boisterous crowd, the MTO Champions Race entered its final three laps. Rohrbach and Grotts were clear at the front, followed by Hatherly, Stiebjahn and Kulhavý. On the final lap, just as the crowd were preparing for the excitement of a sprint finish disaster struck for Grotts. His tyre washed out on a dusty berm near the top of the embankment climb, putting him on the floor for the briefest of moments, but that was all Rohrbach needed – allowing the Swiss Centurion Vaude rider to ease through the final lap and take the victory in his first outing at the MTO Champions Race.

“It was a good test for the Epic prologue, a good opener for the legs,” a happy Rohrbach remarked, as he was swamped by a crowd of young mountain bike fans eager to get a look at his prototype Felt full suspension mountain bike.

Grotts recovered from his crash to claim a comfortable second and the crowd were rewarded for their enthusiasm with a sprint finish after-all, though for the third rather than first. Hatherly and Stiebjahn went shoulder to shoulder around the final u-turn, with Stiebjahn carrying more speed on a wider line and Hatherly taking the shorter inside line. The pair lunged for the line in unison, but Hatherly managed to force his front wheel slightly further ahead and was awarded the final step on the podium by the closest of margins.

Speaking during the event, songo.info General Manager Kathy Crabbe said: “The MTO Champions Race is so important because we bring the world’s best riders to Kayamandi and it’s an opportunity to inspire the kids in and around their home town.” While inspiring the children of Kayamandi is a vital aim of the MTO Champions Race, the exposure which having such high profile riders taking part garners for songo.info is also key. Without raising awareness of the programme it would be impossible for songo.info to continue expanding their sports and education programmes.

Aside from the MTO Group’s headline sponsorship of the MTO Champions Race they are also key supporters of songo.info’s education programme. But with the excitement of the wheel-to-wheel racing still palpable in the atmosphere Lawrence Polkinghorne, MTO Group CEO, was keen to focus on the success of the event rather. “We are so stoked. Such an amazing race with fantastic racing by the pros. But more importantly this is a special community with an amazing vibe, it seems almost like the whole of Kayamandi is out here supporting the event and that is the beauty of songo and why we are proud as MTO to support the charity and the event” Polkinghorne concluded after the evening’s racing was over.

songo.info would like to extend their thanks to all the riders and supporters who took part in, or came out to cheer on the riders on at the MTO Champions Race. As well as take the opportunity to wish all the Absa Cape Epic competitors, who raced in the MTO Champions Race, all the best for the tough eight days of mountain biking ahead. Fans can follow the progress of Christoph Sauser and Jaroslav Kulhavý, as they seek to win their sixth and third titles respectively for Investec-songo-Specialized, from the 19th to the 26th of March by following @songoinfo on Twitter or liking the songo.info Facebook page.