International Triathlon community reach out to FiXi and Edith. 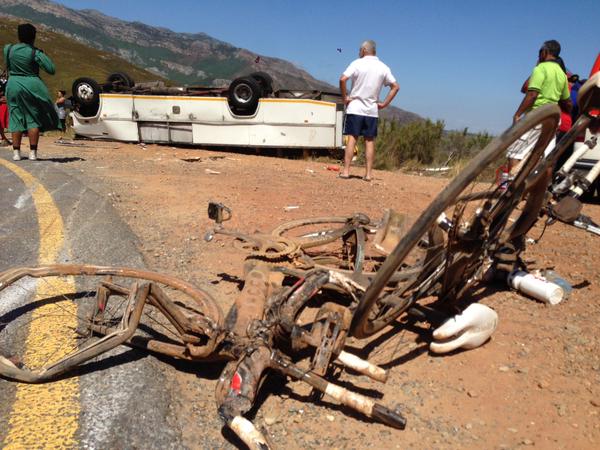 Photos taken after the accident showed the bikes of Niederfriniger and Scattolin severely twisted and mangled. – Photo Supplied

This weekend, tragedy struck two Italian Triathletes on the Franschoek Pass, South Africa. Edith Niederfriniger and Linda Scattolin was on a training ride near Stellenbosch when they suffered serious injuries when a over turned bus crashed into them on March 7.

The two women were riding down the Villiarsdorp side of the mountainous Franschhoek Pass when a bus carrying a local rugby team rolled over and struck the cyclists. Three passengers on the bus, two members of the Groendal Rugby Team and a fan, were killed and at least 26 more passengers were injured.

They have been in South Africa since the 20th of November 2014, training for Ironman SA which is later this month. Niederfriniger, 43, is a two time Ironman champion with 10 Ironman podium finishes and an Ironman PR of 8:59:45. She is an ITU long distance silver medalist and an ETU long distance European champion.

Scattolin, 40, competes as an age grouper for Padovanuoto Dynamica Triathlon and finished 3rd in the 35-39 age group in the short distance event at the 2013 Abu Dhabi International Triathlon. Scattolin, who is known to friends by her Twitter handle Fi Xie, also won her age group at the 2013 Challenge Fuerteventura triathlon. Scattolin works as a researcher at the University of Padua in the field of forest pathology. 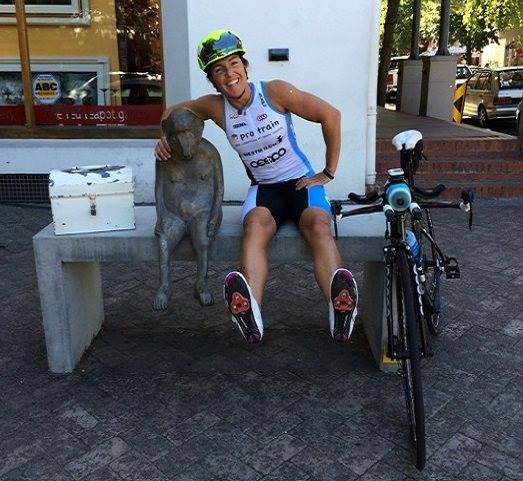 Scattolin, who is known to friends by her Twitter handle Fi Xie – Photo Supplied

Scattolin is still in ICU Ward and awaiting surgery to clean her wounds again and skin graft of her right forearm at Groote Schuur Hospital. She has tubes in her mouth to help her breathe and the Dr will be taking these out once she has had the surgery tonight or first thing tomorrow morning.

Due to issues with her Medical Insurance she has been put on a waiting list at Groote Schuur Hospital and this is because she is in a government/ public hospital and they only operate based on a priority list, but her Doctor has made her priority “RED,” and hopes to operate on her spine and place 8 screws into the vertebrae to stabilize her spine by Monday.

Addition to the concerns for her health, the issues with her medical insurance would mean she’s now also in serious need of financial aid to get her into a private hospital where she could get specialized care.

Italian Triathlon Federation started a fund to raise money in aid to Niederfriniger and Scattolin, a special bank account was opened only for this purpose. It is an official fund raising and the news will be posted directly on the homepage of the federation. First to contribute, of course, was the federation.