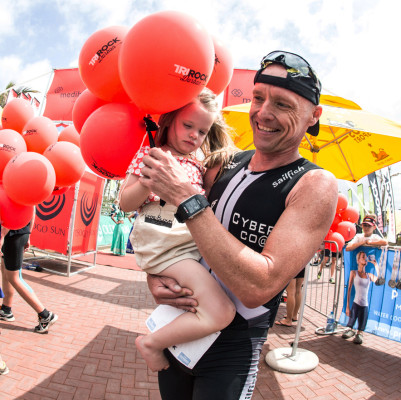 Donovan after winning the TriRock Durban 2014.

How have things gone for you since winning Durban last year in terms of your triathlon participation?

I had a really good first half of the2014/15 season and I actually managed to win every race that I participated in after TRIROCK Durban (so I’m on a five race winning streak). December was tough for training. I wanted to spend time with my wife and daughter during the holidays and I had a lot of work to do in the garden. So although there was a lot of physical activity, I was limited to one session a day in the morning during this period. Since New Year’s I have focused on TRIROCK Cradle and, although quite tired now from a quicker than normal build up and some ‘catch up training’ I think I will be in good shape on the 15th.

Everyone wants to know how you keep getting faster as you get older.  What’s the secret?

No secret really, just hard work. I love the training and in 29 years I have learned the right way to train through a lot of trial and error. Obviously all these years also build up in the body and I am stronger as a result of the miles I have covered. My training has become very efficient and fits in with my other activities so that nothing gets neglected. I believe I have a very balanced life and I actually think I am still improving as an athlete. As long as the motivation is there, I’ll keep going as fast as I can. I have OCD – ‘obsessive competitive disorder’

Racing in Jhb, what are your thoughts?

The altitude plays a role in the swim, especially at the start. So I will have to control my start, which means I will probably lose the feet early on in the swim. This will result in me being a bit further behind out the water than Durban. The rest of the race is done below a threshold effort so the altitude has less of an impact. I think the tough bike and run route suits me as what you lose in speed as you get older you gain in strength.