Second for Sauser as Kulhavý Crashes

The 101 kilometre long Stage 1, of the 2017 Absa Cape Epic which started and finished in Hermanus on Monday the 20th of March, was going according to plan for Christoph Sauser and his Investec-songo-Specialized teammate Jaroslav Kulhavý. But while leading inside the final 10km, alongside Cannondale Factory Racing XC, Kulhavý suffered a crash and a puncture putting pay to hopes of a stage victory. 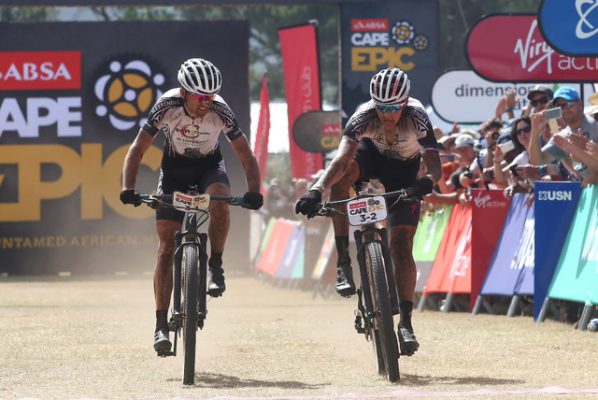 A frantic chase ensued, after they were passed by Nino Schurter and Matthias Stimemann, of SCOTT-SRAM MTB Racing, but Sauser and Kulhavý could not quite reel in stage winners Manuel Fumic and Henrique Avancini. The Investec-songo-Specialized pair stopped the clock in a time of 4 hours, 26 minutes and 29.5 seconds; 54.5 seconds down on the stage winners. The result sees them lose time on Fumic and Avancini, who extended their general classification lead to 2 minutes and 41.7 seconds, but the Investec-songo-Specialized riders are not too disappointed as they moved up to second overall and extended their gap to their key rivals; Team Bulls, Centurion Vaude and Topeak Ergon Racing.

“I’m feeling good. The crash was unfortunate, but nothing serious. I’m very happy with our ride today. I feel it was a good performance. We are both enjoying the racing” said the typically brief Kulhavý after the stage.

Sauser later elaborated: “In the last 10 kilometres Jaro hit a rock with his front wheel and went over the bars. We thought the rim had broken, but fortunately it was just the valve stem. Don’t ask me how that happened. But we put a tube in and lost about 3 minutes, then chased back as best we could.”

Losing such a significant amount of time in the final kilometres and then making up 2 minutes of it inspired Sauser with confidence for the remaining six stages. “I’m very confident. The legs are feeling good and think we were the strongest team today” he continued.

One of the mantras Sauser preaches is a safety first approach to stage racing, with the race already having claimed a number of high profile casualties due to crashes and the extreme heat, it was important for the Investec-songo-Specialized to mitigate the risks. “Look it was hot out there. It was the right decision to stop at the final water point and refill our bottles. Everyone ran out of water and [Matthias] Stimemann really struggled in the final kilometres” Sauser concluded.

Tuesday marks the first moving day of the 2017 Absa Cape Epic as the race moves bases from Hermanus to Greyton. The 102km long stage features 2350 meters of vertical gain and includes spectator points at Creation Wine Estate and the Caledon Botanical Gardens. You can follow all the Absa Cape Epic the action live on www.cape-epic.com and watch the day’s highlights on SuperSport 2 at 21:30 tonight. You can also engage with the team by following @songoinfo on Twitter or liking the songo.info Facebook page. 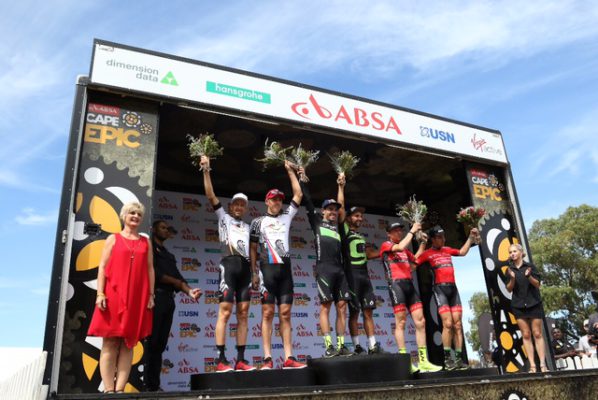