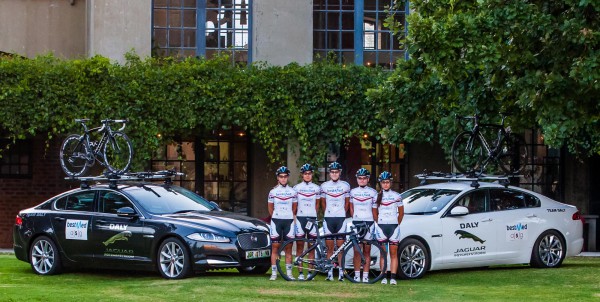 SA track star Matthee followed it up with another podium for the team at Sunday’s Cape Town Cycle Tour.

Team manager Owen Botha said, as one of the highest profile weeks on the national racing calendar, it had been an ideal window of opportunity to introduce the new partnership.

“The beautiful Boland is a pretty place to launch the team cars, which handled the mountain passes along the route with ease and kept pace perfectly with the peloton.”

Botha said the sponsorship, which was facilitated through Jaguar Daly in Potchefstroom, would include the use of two luxury sport saloons – the XF 2.0 petrol premium luxury model and the XF 2.2 diesel version, the most fuel efficient in the line-up.

“The saloon is a real head-turner and complements the professional appearance and performance of the team.”

Pinarello is also bike sponsor of the Bestmed-ASG-Multihull outfit.

According to Jaguar Daly dealer principal Johan Roos, it was this natural synchronicity that made the sponsorship the perfect fit.

“There’s a lot of synergy among the partners and we all strive for excellence.”

He said Jaguar was pleased to be partnering with a local women’s team in particular.

“Our customer profile on the XF shows a growing number of women, so it’s important for us to recognise this growth by engaging in this sponsorship.”