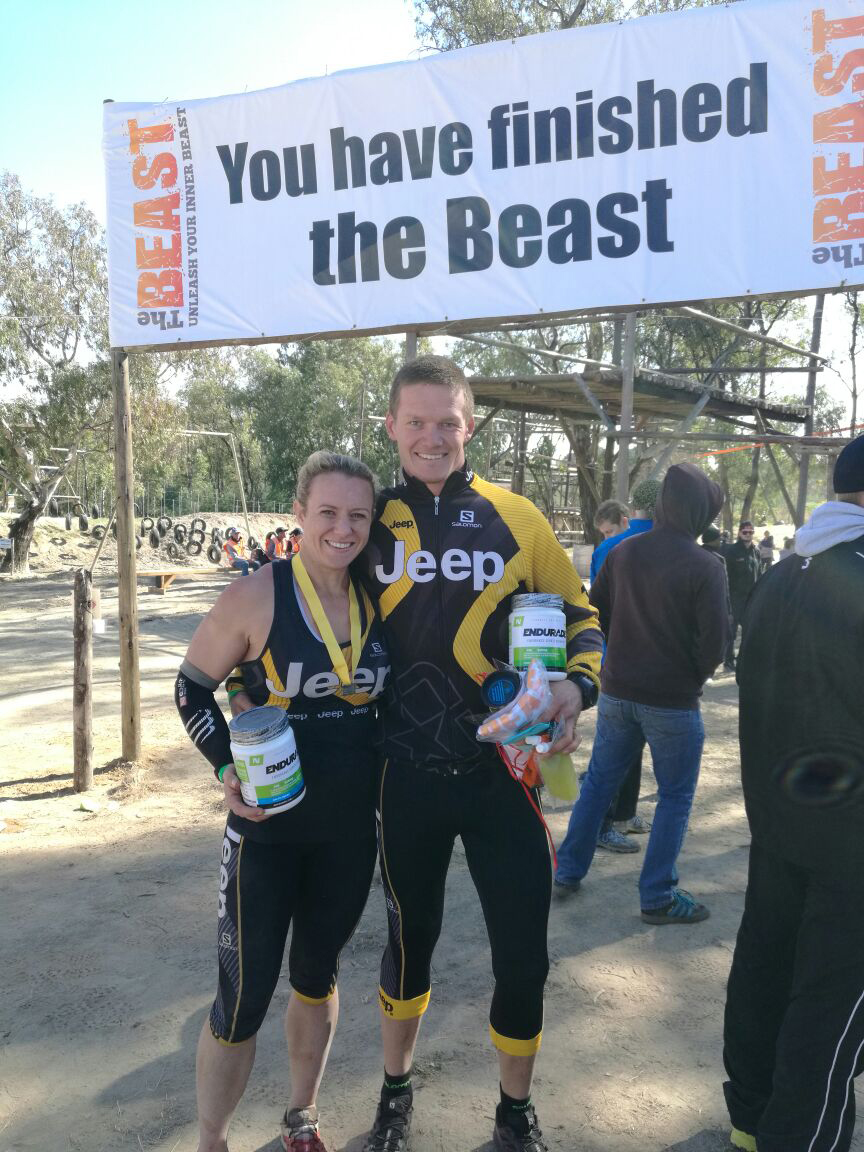 13 JUNE 2016, JOHANNESBURG – Jeep Team’s Thomas van Tonder and Carina Marx dominated the toughest Beast OCR Challenge yet, with both athletes claiming the respective Men’s and Women’s titles at the event, which took place on Saturday, 11 June, at The Wedge in Muldersdrift, Gauteng.

Van Tonder remains unbeaten, having now won all five of The Beast Challenges since the series launched in 2015, while Marx was the only female competitor who managed to finish the extreme Savage Beast Elite course (30 challenging obstacles over a 15km trail run).

The Men’s race began with a fast sprint to the first obstacle, a rope climb, which was then followed by a water crossing through a freezing pool. Van Tonder and Michael Joubert reached the water first, closely followed by Marius Smith and Bradley Claase.

Van Tonder and Joubert raced alongside each other for most of the race, until reaching the final game-changing obstacle – a 50m-long sequence of ropes, nets, rings, chains and monkey bars, which was very similar to Jeep Warrior’s Breaking Point, only much longer and tougher.

Van Tonder got through the obstacle on first attempt, and then on to the finish to claim the Men’s title in 1h23m. Joubert finished 2nd in 1h26m, followed by Smith in 3rd (1h29m) and Claase 4th in 1h31m.

Only four female athletes competed in the Women’s elite race, which presented the same course as the Men’s event. Marx led from the start, managing to also get through the last 50m obstacle on her first attempt. She was the only elite female competitor to finish, in a time of 3h19m.

Said Marx, “Comparing this race to the very first Beast Challenge, I have to give the team a big applause. The route was marked clearly and the obstacles were of a high standard. Course designer, Jason Friedman, designed a very tough course. He combined a whole lot of tough obstacles, from rope swings, to tyres, to a long net climb, body weaver and finally handle swings. Thankfully I wasn’t under any pressure when it came to that last monster of an obstacle and could take my time on every section. After getting through two thirds, the true test came. I was fighting my mind and my tired muscles. I started shaking uncontrollably, but with the help of a few friends and a crowd chanting my name, I had no other option but to finish this race. So I did just that and conquered The Beast.”

The unique event, the first of its kind in South Africa, took place inside the Bellville Velodrome and saw 220 competitors battle it out over 6 elimination rounds, culminating in the finals where 15 of the top athletes went head-to-head.

The course consisted of a 1km sprint with 15 intense obstacles, and attracted professional athletes from a range of sports disciplines, including OCR, gymnastics, martial arts, rugby and trail running.

Said Deysel, “I managed to get good and consistent times in the elimination rounds and I’m very happy to say that I finished the day in 2nd place behind Trevor Lagerwey who was very strong and consistent throughout the day. A big well done to The Grind team for the awesome event they put together. I had so much fun and definitely think this is something that’s going to make a name in the OCR industry.”

In a reversal of last year’s race, McGregor narrowly edged out 2015 K1 winner, Andy Birkett, in a thrilling sprint finish to claim the title a split second ahead of Birkett. Brandon van der Walt finished 3rd.

The result means McGregor and Birkett have now qualified for the SA team heading to the Canoe World Championships in Germany later this year, where McGregor will be aiming to claim his seventh world title.

Said McGregor, “I am stoked with this win and really looking forward to the World Champs. There were five boats together coming into the last turn and the tough conditions asked a lot of questions. Thanks to everyone for all your support on the bank and well done to all the competitors on a solid race.”

Limited to a field of just 300 riders, the Kalahari Challenge is a full-service stage race set in the bushveld of southern Botswana. The race offered a variety of single track through the bushveld, gnarly technical uphills through the Kalahari Mountains and hardpack track.

Redelinghuys and Hammond led the race from start to finish, winning all three stages, and culminating in a total time of 9h51m15.

Said Smith, “Yesterday was a proper challenge at Van Gaalen racing the 4th leg of Ashburton Investments’ National MTB Series. The 113km race with almost 2000m of climbing over very tough terrain, was a good test for the body, both physically and mentally. It was brutal, but I’m happy with my top 15 finish. Thanks Jeep Team for the immense support.”