Joaquim Rodriguez wins under the deluge 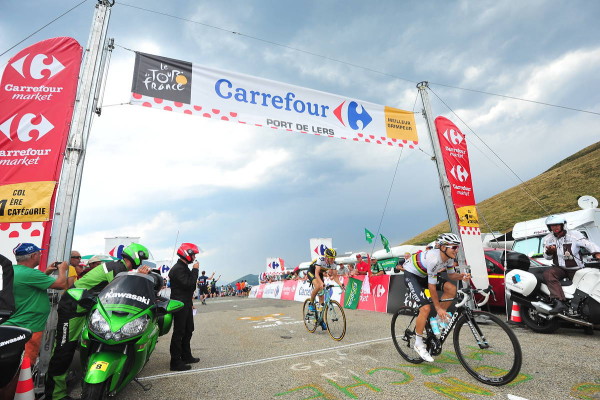 Joaquim «the little cigar» (Purito) Rodriguez (Katusha) claimed his second stage win at the 102nd Tour de France after the Mur de Huy as he soloed to victory with 7.5km to go in the ascent to Plateau de Beille. Under the deluge, Jakob Fuglsang (Astana) and Romain Bardet (AG2R-La Mondiale) made the top three while the yellow jersey group crossed the line with a deficit of 6.46. Despite a few attacks by his adversaries, Chris Froome (Team Sky) kept the race under control and retained the lead in the overall ranking at the exit of the Pyrenees.

Preidler passed first at the col du Portet d’Aspet and second to Durasek at the col de la Core where the bunch led by Team Sky had a deficit of 8.30 with 93km to go. Kwiatkowski, Preidler and Vanmarcke rode away with 76km to go in the valley just after the downhill of the col de la Core. Preidler who suffered from a pain in his right knee couldn’t hold the pace up to the Port de Lers where a chasing group was formed of Bardet, Rodriguez, Fuglsang, Sicard, Izagirre and Meintjes. The peloton started climbing with a deficit of 12.30.

Between the Port de Lers and Plateau de Beille, the riders experienced stormy weather conditions. Kwiatkowski and Vanmarcke forged on. After cresting the Port de Lers with only five seconds lead, they started the final ascent with an advantage of 1.50 over Bardet, Chérel, Rodriguez, Fuglsang, Sicard, Izagirre, Barta and Meintjes. Kwiatkowski continued solo with 13.5km to go. After getting rid of Bardet and Fuglsang, Rodriguez caught and passed Kwiatkowski with 7.5km to. Successively, Alberto Contador (Tinkoff-Saxo), Vincenzo Nibali (Astana), Alejandro Valverde and Nairo Quintana (Movistar) tried to escape from the yellow jersey group also composed of Thibaut Pinot (FDJ), Chris Froome, Richie Porte and Geraint Thomas (Sky), Tejay van Garderen (BMC), Pierre Rolland (Europcar) and Bauke Mollema (Trek). Froome himself accelerated with 4.5km to go but there was no difference at the end between the “Big Five”. Despite a courageous chase under the deluge, Fuglsang and Bardet didn’t manage to come across to Rodriguez who took his first mountain stage win at the Tour de France.