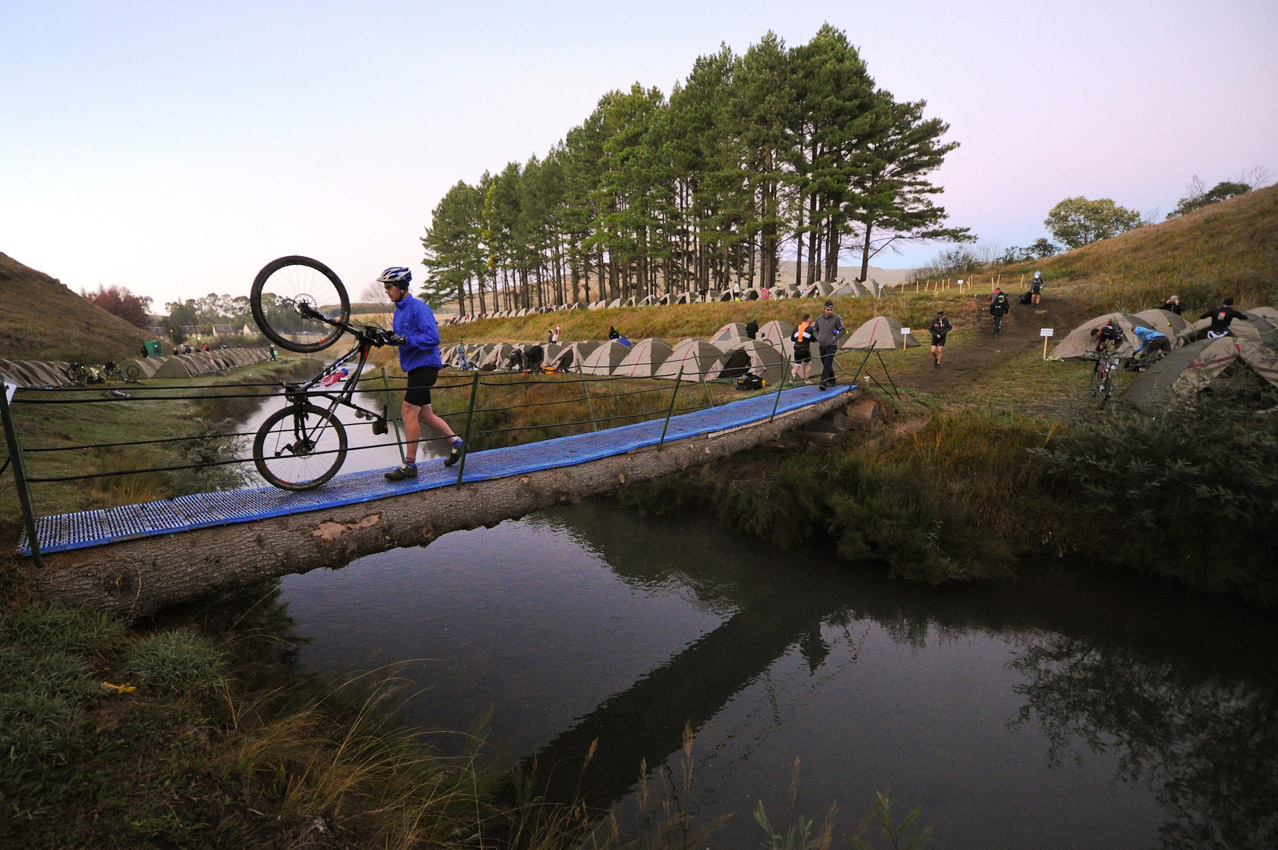 Participants in the 2015 edition of the Old Mutual joBerg2c can look forward to two brand-new race villages when the nine-day stage race starts on April 24. Photo: Kelvin Trautman

The Old Mutual joBerg2c will roll out two new race villages for the 2015 edition of the nine-day mountain bike race, which starts just south of Johannesburg on April 24.

Race organiser Craig Wapnick said participants could look forward to a completely different experience on the overnight stops for the fifth and sixth stages of the 900km overland ride to Scottburgh.

“It’s quite exciting because the new venues mean we can offer better ablution and dining facilities and better accommodate day trippers and supporters.”

Wapnick said day five would still start at Winterton in the Central Drakensberg but would now end at Clifton Preparatory School on Nottingham Road instead of the traditional stop at Glengarry Resort in the Kamberg.

“Clifton Prep has always been the school behind the race village but now we’re moving to the school grounds, which make it so much easier for them to roll out the red carpet for riders.”

Aside from being logistically easier, he said the new venue would give participants and their families more things to see and do when the day’s racing was done.

“It’s in the heart of the Nottingham Road tourist route, so there are lots of quaint little hotels, eateries and craft breweries with a lekker little vibe in the area.”

The following day, said Wapnick, their arrival would be eagerly awaited at Glencairn Farm on the Sani Pass road just outside Underberg, which replaces the Hazeldene Farm stay.

“This is my fellow organiser ‘Farmer Glen’ Haw’s new farm and also doubles as the registration venue for the Nedbank sani2c mountain bike race.

“Our Old Mutual joBerg2c riders will be among the first to experience Underberg School’s famous hospitality at the new venue.”

According to him, the route would remain largely unaffected by the changes.

“If riders are feeling energetic after their day on the bike, they can have some lunch and then take a quick spin up to the lookout point on Sani Pass.”

Wapnick said the other big news was the revamp of the final race village at Jolivet Farm in the Highflats region.

“This is another of Glen’s big projects and the remodel is well underway.”

A new barn-style mega-structure replaces the current dining arrangements and will include a permanent chill zone for riders and brand-new bathroom facilities.

Wapnick said the Highflats Farmers’ Association would once again be responsible for the running of the race village.

“While these three venues are changing, the local communities are still going to get the same great benefit.

“For many of our beneficiary organisations, this event has become the single most important fundraiser of the year, so it’s win-win for the hosts and the riders.”