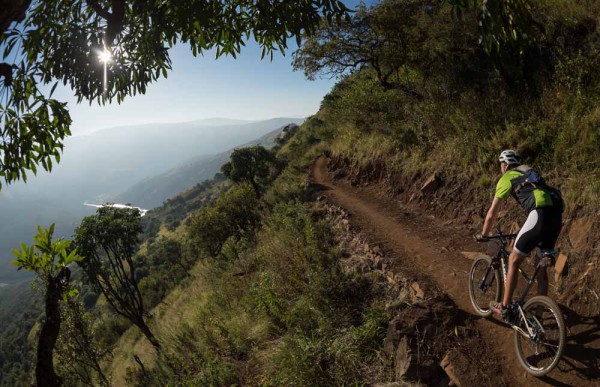 The Old Mutual joBerg2c stage race has teamed up with Game On Sports and Travel to help international mountain bikers discover and “Ride South Africa”.

The Old Mutual joBerg2c stage race has teamed up with Game On Sports and Travel to help international mountain bikers discover and “Ride South Africa”.

Organisers are preparing to share the highlights of SA’s favourite nine-day stage race with visitors to The Cycle Show in Birmingham, England, from September 24.

Billed as the UK’s number one cycling exhibition, the four-day expo attracts between 25 000 and 30 000 visitors over three days, with a dedicated day for the media and trade participants.

According to race organiser Craig Wapnick, the 900km joBerg2c journey offers one of the best ways to see vast stretches of the diverse South African landscape.

“To ride the beloved country means riding through four of our nine provinces, experiencing different terrain and eating great food prepared by local people who are passionate about their communities,” said Wapnick.

“It is a full-service journey across a great country that is better off for hosting a bunch of nutty mountain bikers.”

With the exchange rate currently hovering around 20 South African rand to the British pound, Wapnick said there had never been a better time to make the long-haul flight.

“It’s now an incredible value-for-money experience – and the price of beer is a massive attraction,” he laughed.

Wapnick said the ever-growing number of foreign participants necessitated the involvement of a partner such as Game On, offering a complete turnkey experience in terms of travel and accommodation arrangements, race entries, add-on services and additional tourism activities.

Game On’s Ryan Hillary said there had been a huge increase in international interest in the event, which was why his company had pursued an official partnership for the second year in a row.

“We only got involved very late in the registration process last year and ended up looking after groups from countries all over the world, including Switzerland, Sweden, Finland, Belgium, Australia and the United States.”

Hillary said the feedback from the majority of the international contingent was that they had never taken part in such an efficiently run event.

“This event is only six years old and getting better and better each year. The joBerg2c team have set a standard that will be hard to match anywhere in the world.”

He said almost half of the group had taken up the customisable safari package, which saw them unwinding in a five-star game lodge after the event.

“We already have groups for next year who have family flying in afterwards to join them for an extended holiday across South Africa.”

Hillary said they were aiming to have at least 100 to 150 riders on their travel packages for 2016.

The event starts in Heidelberg just south of Johannesburg on April 22 and finishes at the South Coast resort town of Scottburgh near Durban on April 30.