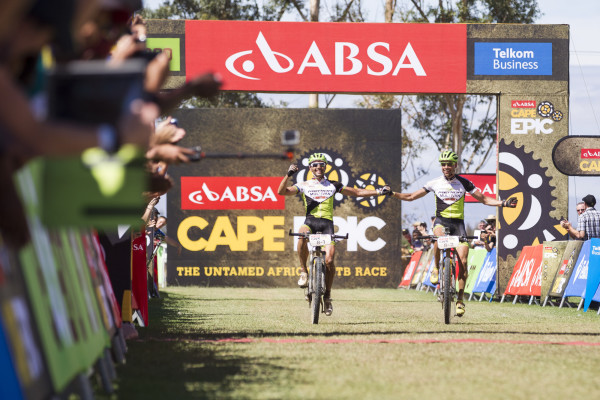 If there was a prize for popularity at the Absa Cape Epic the Spanish/Dutch combination of José Hermida and Rudi van Houts would be the winners by some distance.
The irrepressible Spaniard is always smiling, always ready with a joke and appears to have an endless supply of good humour. Van Houts is a bit quieter and something of a foil to Hermida, but also seems to sport a permanent smile. Hermida believes that his attitude is important in a race as tough as the Absa Cape Epic: “My way of facing races – being positive and with a smile – can be a strength. With those two things you can make big things happen in endurance sports.” Van Houts acknowledges as much too: “The Epic is hard enough anyway, so it is better to have a fun partner who keeps the spirit high and so you can motivate each other.”

But there have been times over the years where they have stopped smiling. In the 2014 Absa Cape Epic, for example, the Multivan Merida teammates had won the Prologue and were wearing the leaders’ yellow zebra jerseys on Stage 1 but lost over an hour when the Spaniard fell victim to stomach problems. The illness had apparently been triggered by a food allergy. A poignant video clip taken from a helicopter showed an obviously suffering Hermida off his bike and leaning on Van Houts for support. That was the second time the pair had worn the yellow zebra jerseys and then been struck by bad luck. They donned them after winning Stage 1 in 2013 but the next day were set back by a bad puncture, dropping off the leading bunch and down the field.

“This year the goal for our team will be to have a stable Epic,” said Hermida. “Not like last year when we had great moments but also a really bad one. So our plan is to fight for the overall, especially in the second half of the race.”

Van Houts said they would be aiming for a podium finish, “but if we are too far away after the first three days then a stage win would be nice”.

“We have a good combination in character and also in riding style,” said Hermida. “The Epic means many hours on the saddle and having to face many ‘bad’ moments, so you need a good partner.” 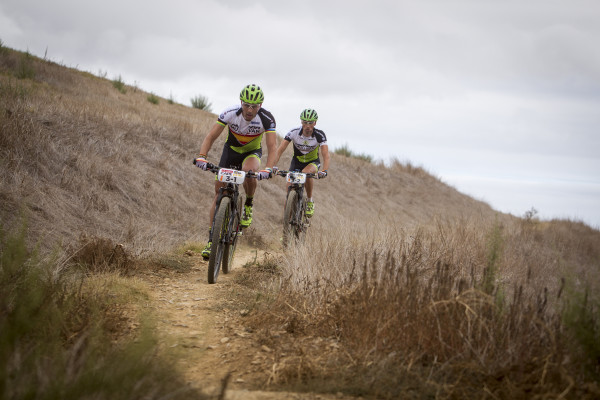 During the Prologue of the 2014 Absa Cape Epic Mountain Bike stage race held at Meerendal Wine Estate in Durbanville outside Cape Town, South Africa on the 23 March 2014
Photo by Nick Muzik/Cape Epic/SPORTZPICS

Turning to their riding strengths, Van Houts said: “I’m pretty strong at climbing and technical descents. I think José and I are similar in our strong points and a good match because on we are both also cross country riders.”

Living in different countries means they do not train much together but will be meeting for a training camp in Mallorca this month “The distance keeps the relationship alive,” laughs Hermida.

Van Houts points to the combinations of Karl Platt and Urs Huber (Bulls), Simon Stiebjahn and Tim Boehme (Bulls 2), Christoph Sauser and Jaroslav Kulhavy (Investec Songo Specialized), and Alban Lakata and Kristian Hynek (Topeak Ergon) as rivals to watch. Hermida adds that the Bulls and Specialized teams “are super specialists in these kinds of races and especially in Absa Cape Epic”.

They will be riding a Merida 29er full suspension bike: “If the new prototype is ready I think I will ride it. Or else it will be the Big Ninety-Nine like last year,” said Van Houts. “The 29er wheels just roll well and the rear suspension gives me extra comfort to keep me fresh for the next stage.”

“In 2007 I used a hardtail 26-inch bike and in 2011 a hardtail 29er, but since that we have been on fullys,” added Hermida. “The Merida Big Ninety-Nine is a great bike combining lightness, good suspension function and a racing design that keeps the cross country spirit alive. But we have a new fully bike that is still in proto … if we get it in time we will use it for sure.”

Van Houts said the Absa Cape Epic was “the stage race with the toughest competition”. This was because it attracted marathon specialists and cross country riders wanting to win the event. “Then there is the great media attention and the super organisation. There is no other organisation which thinks about so many details as the Cape Epic.”