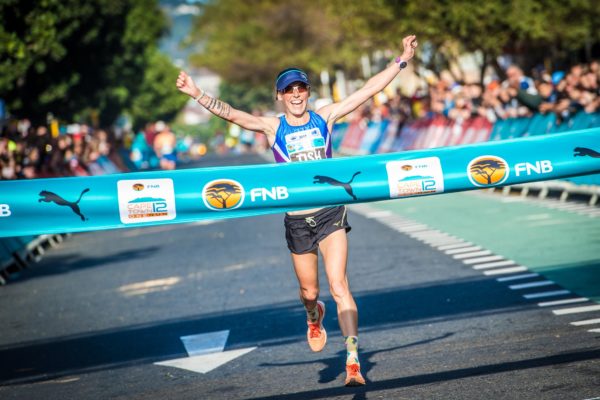 The women’s race at the 5thrunning of the FNB Cape Town 12 ONERUN on Sunday 19 May has received an additional boost with the inclusion of former champion, Tish Jones, Bahraini Desi Jisa Mokonin and Ethiopian Degitu Azimeraw.

Jones won the title in 2017, a month after running in the London Marathon and setting a then PB of 2:33.56 (subsequently improved to 2:31.11 at this years’ London Marathon). Jones is back and in possibly better shape than she was in 2017 when she won the race, ominous signs indeed. The only question is how she has recovered from her efforts in London on 28 April.

Desi Jisa Mokonin is another who comes with a pedigree, even though she is only 21-years of age. Mokonin has some impressive times behind her name already. Her best 10 000m time of 31:19.00 is faster than the best of Stella Chesang (31:39.0), the 10 000m Commonwealth Games Champion. It is worth mentioning though, that Chesang’s time was run at 1100m altitude in Kampala and Mokonin ran her time in Hengelo at sea level. Mokonin does come with a 68:10 Half Marathon time from 2018 when she placed 7that the World Championships, and with a 15:58.46 time in the 5000m, she has to be a huge threat to any of the athletes who line up on Sunday 19 May.

Degitu Azimeraw from Ethiopia has only been racing competitively since 2017. The 20-year-old though has already clocked 15:54 for the 5000m in the rarified air of Addis Ababa (2355m above sea level), and 1:26.01 for the rarely run 25km. But it is her 66:07 for her 4thplace at the Ras Al Khaimah (or RAK) Half Marathon on 8 February that speaks volumes. Azimeraw was 22 seconds off the winner, SenbereTeferi who clocked 65:45. Currently the fastest time in the world to date and the 14thfastest of all time.  Azimeraw’s 66:07 ranks her 22ndon the all-time list and 9thon the 2019 list.

Azimeraw will come into the FNB Cape Town 12 ONERUN on fresh legs on 19 May, as the RAK Half Marathon was her last competitive outing. This means she will in fact be the freshest of all the athletes who line up come race day, which makes her very dangerous indeed.

“I have been preparing for this race since February,” says Azimeraw. “I had a good run at RAK where I improved my best time by forty seconds in only my second half marathon. So I am confident of my performance. I know this is a deep field with Stella (Chesang), Desi Jisa (Mokonin) and the South African girls. So I expect a tough race. But I am ready.”

Once again, the FNB Cape Town 12 ONERUN has assembled a star studded line up for the 2019 race. The current course record of 38:22 set by Vivian Cheruiyot in 2015 may be in danger with the pedigree of athletes coming to Cape Town.

Charity Support: When entering online, runners can choose to make a monetary donation towards either or all four of the FNB Cape Town ONERUN Charities: 1. help2read, 2. Cotlands, 3. Die Burger Kinderfonds and 4. The Cape Of Good HopeSPCA.

This year each event charity has also been allocated x100 entries which will be available atR500 each. When entering online, runners can choose this specific entry option. The proceeds will go directly to the selected charity.

LIVE STREAMING:  The FNB Cape Town 12 ONERUN will be live streamed on Facebook via the following link https://bit.ly/2Yqbgbt Tune in from 08h15 on race morning to catch the action!

FNB is proud to once again bring you the FNB Run Your City Serieswhich comprises of three unique mass participation events that integrate business involvement, family, diversity, investment in community, world class achievement and fun for all participants, both individuals and businesses alike.