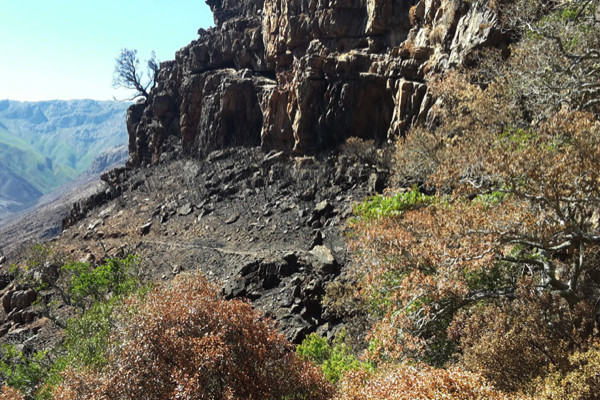 The Jonkershoek Mountain Challenge (JMC) is without a doubt one of the most incredible mountain running routes in the country and has become known as one of the most scenic and challenging trail running races in South Africa, with many top trail runners taking part each year.

It’s official, the 5th edition of the Jonkershoek Mountain Challenge (JMC) and the first leg of the Mountain Challenge Series, will go ahead as planned on the 3rd May 2015; albeit with some minor changes to the beginning and end of the route.

The devastating fires that recently raged in the Jonkershoek valley, caused some doubts as to whether the JMC would continue as planned. However, after consultation with the relevant authorities and land owners, as well as inspecting the parts of the route that are most heavily affected, we are pleased to announce that the JMC 2015 will be taking place as scheduled.

“The damage to the fynbos is devastating, but the main paths remain compacted and relatively undamaged,” says Owen Middleton, MD of Wildrunner. “There is already some life coming through and we are confident that by May there will already be significant growth on the ground and path edges to prevent any further damage by runners taking part.”

Middleton urges curious runners visiting the valley to stick to the areas that have been cleared for access by the authorities, to stay on the paths and not go off-path or venture into the areas marked off as no-go zones. “The pine forest areas don’t look that bad on the outside, but because the fire burnt at surface level the root structures have been burned and are thus severely compromised.  This makes the trees incredibly unstable and likely to fall over in strong breeze.  It also makes the ground surface very unstable, with strong likelihood of collapse were the roots have burned away,” he said. There is a map at the Jonkershoek entrance gate informing the public were they can and cannot go. The plantation and reserve areas remain closed to vehicle traffic.

Route changes
The route changes that we have proposed have not been finalised and will be made public on 3rd April, exactly one month before the 5th edition of this extraordinary trail race.

For more information go to www.mountainchallenge.co.za