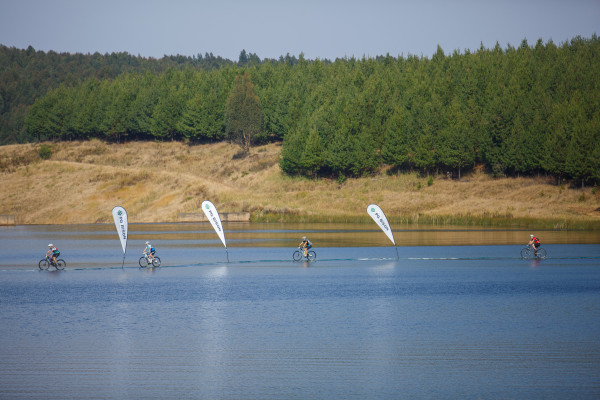 The PG Bison Bridge over the SappiMossbank Dam claimed a few victims during day one of the Trail event, the opening event of the 2016 KAP sani2c on Tuesday. Kevin Sawyer/
Gameplan Media

Himeville – Tuesday marked the beginning of the one of the most popular mountain biking events in South Africa as the Trail event got the 2016 KAP sani2c underway with many riders easing their way into their three day journey from the foothills of Sani Pass to the breakers at Scottburgh Main Beach with the Adventure and the Race events still to get underway in the coming days.

The opening day of the thirteenth edition of the KAP sani2c dawned clean and clear as the Trail riders set off from Glencairn Farm just outside Himeville with one of the more unique and quirky features of this specific event coming to the fore in that there is no winner of the Trail. There are no trophies or winner’s cheques for those first to Scottburgh but instead if you are the unfortunate pair to cross the line first you are greeted by a face full of cake.

With some tricky trails to negotiate on the opening day of the event, the majority of the field would have kept their wits about themselves with two more stages still to go and the feeling of getting the first day out of the way was a relief for the majority of the newbies to the event.

As the riders put their feet up at the MacKenzie Club overnight stop, participants of the Adventure will be preparing to set off on the 82 kilometre opening stage from Glencairn on Wednesday.

The Adventure caters to the more competitive rider however the atmosphere is still very much a social one, despite the fact that there is recognition for the winners at the end of each of the stages.

The 1500-plus Adventure riders will be expecting some favourable conditions following the weekend’s rain as the more competitive riders jostle for positions at the front of the race with the more social riders taking in all the scenery that the spectacular Southern Drakensberg has to offer.

The opening stage of the event gives riders their first taste of one of the iconic floating bridges as they wind their way across the PG Bison Floating Bridge that runs across the Sappi Mossbank Dam. The floating bridges are always popular for spectators who are bound to enjoy their fair share of mid-dam spills over the three days.

Many of the Trail riders would have been happy to know that the final climb into the MacKenzie Club has been changed this year, helping save the legs for what often proves to be a bruising second stage thanks to the infamous climb out of the uMkomaas Valley.