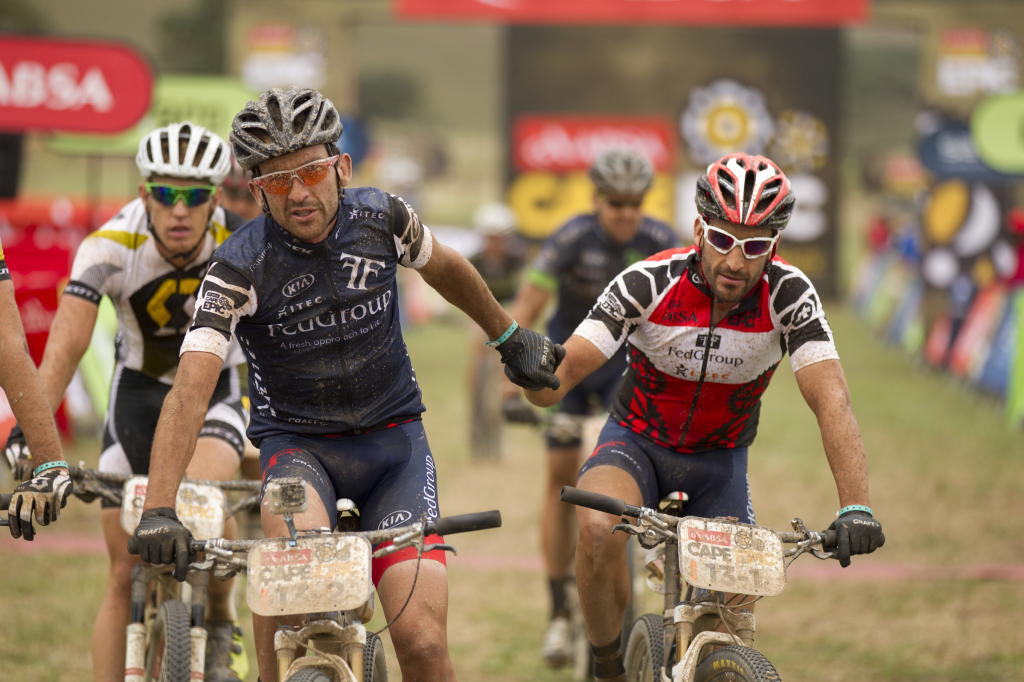 ROBERTSON – during stage 3 of the 2014 Absa Cape Epic Mountain Bike stage race held from Arabella Wines in Robertson to The Oaks Estate in Greyton, South Africa on the 26 March 2014
Photo by Gary Perkin/Cape Epic/SPORTZPICS

The 2015 edition of the race takes place from 15 to 22 March, and will once again take 1 200 riders through some of the Western Cape’s most unspoilt territory.  The Untamed African stage race begins with a prologue on Table Mountain, starting from the University of Cape Town, and finishes eight days later at Meerendal Wine Estate in Durbanville.

It will be the former SA marathon champion’s 11th start, but he had to pull out in 2011 when he broke his collarbone. Evans has finished on the overall podium three times, with his best result being second place with David George in 2012.  He will be riding for the second time this year with another local star, Max Knox, in Team Biogen/Volcan.  Last year Evans was penalised an hour for taking a shortcut on Stage 4, which dashed the pair’s hopes of winning the race for the Absa African jersey (for the first all-African team to finish).

So what are their objectives for 2015? “To try follow all the route markings,” laughed Evans. “We want to have fun and, with some luck, top five should be achievable.”  Knox said he hoped to “have a smooth race, enjoy the experience and give my best effort”.  Knox added that their training was going well and Evans was “in some of the best shape that I have seen him in”.  Plettenberg Bay-based Evans added: “Well I’m beating him (Knox) on Strava, so I’d say it’s all good for now.”

Evans and Knox “rode for the first time together last year, at short notice, and got on really well, despite being competitors for a decade”, said Evans. “That decade of racing against each other is why we automatically know each other’s strengths and weaknesses.”  Asked about the importance of the team dynamic in the Epic, Knox said: “Life is much easier if you and your partner can get on well.  But over the years we have seen some combinations that have succeeded even though the two riders are of different nationalities.  However, I think the fact that Kevin and myself are friends will benefit us.”  They will be riding Volcan bikes this year: “I’m going back to the bike that saw me stand on the podium in 2010, Volcan. They are busy building Max and I some custom bikes as we speak, so we’ll be on them soon,” said Evans.

Evans said the combination of four-time winner Christoph Sauser and Jaroslav Kulhavy would start as favourites on paper, but “over the years I’ve learnt that it’s hard to predict a winner … there are too many variables”.  “I think there are many strong teams and everyone on the start line is an opponent to never be underestimated,” said Knox.

Meerendal Wine Estate will host the finish of the race and the Grand Finale celebrations for the very first time on 22 March 2015.  The Grand Finale will kick off with live entertainment, a Farmer’s Market, delectable food and wine as well as glorious scenery.  Dedicated vantage points will be accessible to the general public, so that all may have a piece of the mountain biking action.