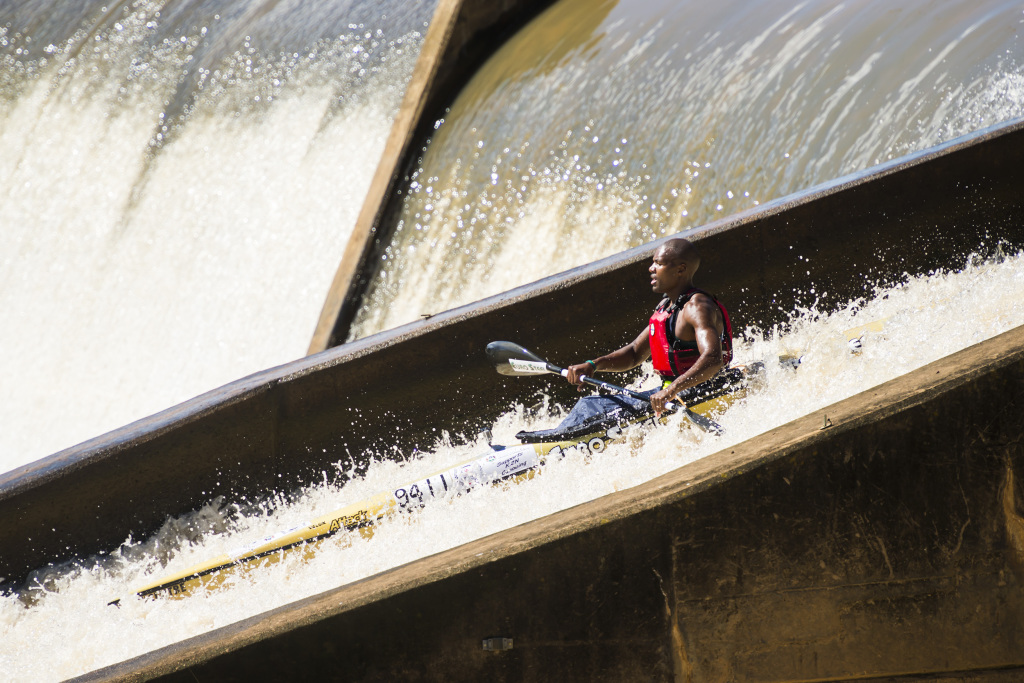 Leading from the start, Sbonelo Khwela leads down Ernie Pearce weir shortly after the start of the Umpetha Challenge on Sunday. – Anthony Grote/
Gameplan Media

Pietermaritzburg – Reigning Dusi K2 champion Sbonelo Khwela claimed the Umpetha Challenge men’s title for a second year in succession while Abby Adie went one better in the women’s race, winning it for a third year in a row, in ideal clear conditions on Sunday.

The 18km race, a key Dusi qualifier and the first front row seeding event, was sponsored by the KwaZulu-Natal Department of Sport and Recreation, from the Natal Canoe Club (NCC) in Pietermaritzburg to the Bishopstowe Farmers Hall, just outside the city.

Khwela (Team EuroSteel), the men’s winner, was pushed all the way on the water by Thulani Mbanjwa (Build It), another former Dusi champion, but used his superior portaging ability to pull clear on the three-and-a-half kilometre run in to the finish to record a convincing victory by over one-and-a-half minutes.

“It is a hard race, especially the portage,” Khwela said afterwards. “It is long and no one has really trained for it, so I knew that we were all going to struggle on the portage. We had to use what we had to be there at the finish.”

While he looked fresh crossing the finishing line, Khwela revealed that he felt far from his best. “Actually, I was finished,” he said with a laugh. “I was just pushing myself because I saw the finish was close. The excitement inside of me, knowing I was the winner, helped carry me across the line.”

Until the portage at the end, he said, it had been a tight battle. “In the water, it was cat and mouse between me and Thulani. We were together all the way until we got to the takeout. That’s where I told myself I needed to push as hard as I could to open a gap on him.” 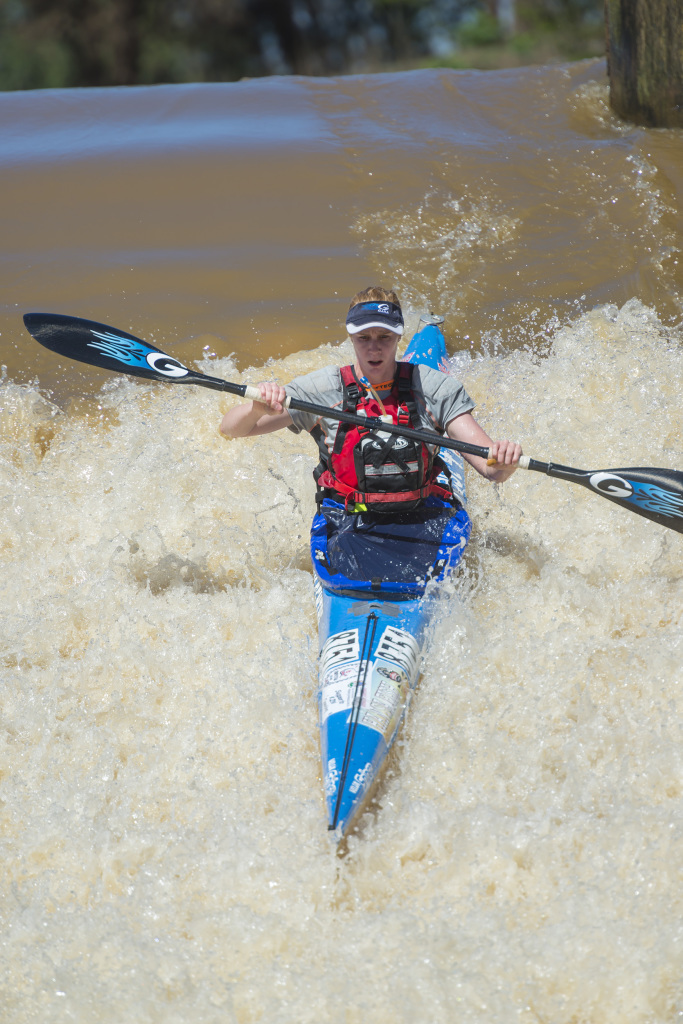 Abby Adie slides down the Ernie Pearce weir at the start of the Umpetha Challenge on Sunday en route to a hat trick of victories in the key Dusi qualifier. Anthony Grote/
Gameplan Media

Adie, meanwhile, had an anxious wait to see whether or not she had won the women’s race because her ICF Canoe Marathon World Championships’ doubles partner Laura O’Donaghue had started in a later batch. In the end, though, Adie won convincingly by almost five minutes.
She was the only woman to start in the A-batch and found the going tough in the beginning, she admitted. “I thought I would just go as hard as I could, but at the star on the Drift, it wasn’t so great. I got dropped. I was right at the back. My arms just didn’t have anything in them.

“Once I hit the river, my comfort zone, I managed to push quite hard and catch up to a few guys, so I loved the stretch on the river. That was lots of fun.”

The event, which is put on by the NCC Development Team and was named the KwaZulu-Natal Canoe Union’s (KNCU) One-Day Race of the Year for 2013, was dominated by development paddlers, with the first seven finishers in the men’s race coming from development backgrounds.

commented: “It shows that development in KZN is growing. It shows also that the race plays an important role in development. They’re strong at running and paddling. I think it is a great achievement for development in canoeing as a whole,”  said race director and the head of the Development Programme at NCC, Thuthu Manyathi.

“They have come on in leaps and bounds since the first year, which was three years ago, and they’re starting to understand event management. You can see the way they conduct themselves now. There is a huge improvement on what it was three years ago and it is clear that the programme we have put in place is benefitting the individuals themselves, and ultimately the sport of canoeing.

“The impact that canoeing and being involved in the development race has created in the community is massive,” he added. “Everybody knows these people now and they have a standing in the community, which is fantastic.”

Director in the Department of Sport and Recreation, Prem Vayapuri, also expressed his satisfaction with the growth of development in canoeing. “NCC, together with the KNCU and the Department of Sport, have increased the participation base. At the same time, talent is emerging and that talent is being addressed through participation in the Dusi too, so this development race helps lift people on to the next level,” he said.

More information can be found at http://natalcc.co.za/umpethaHome.html