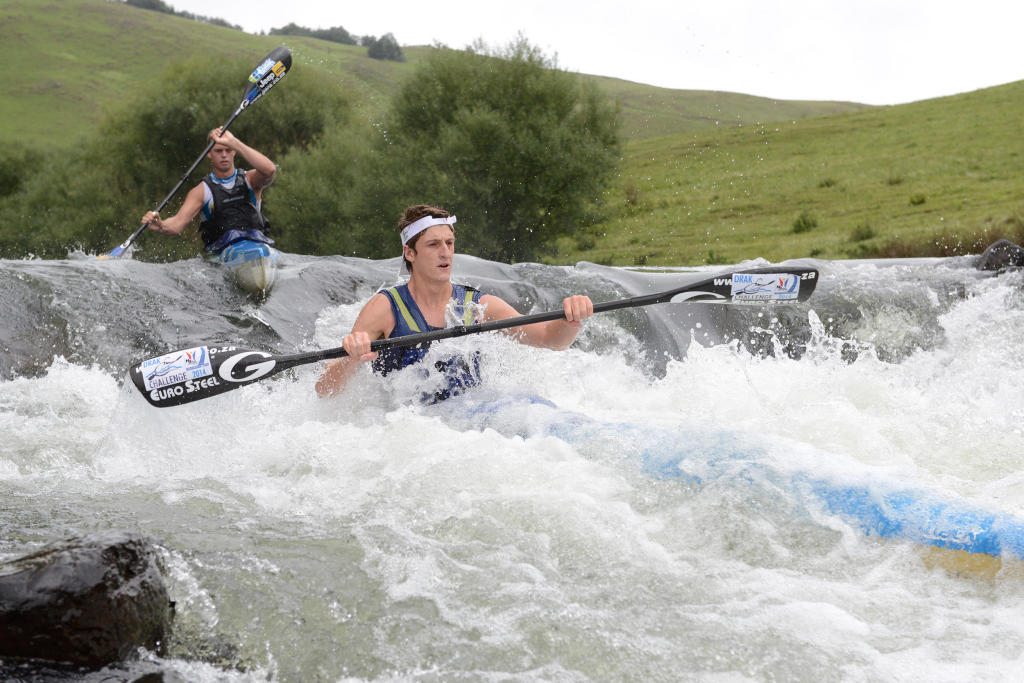 Underberg – Dusi K1 champ Lance Kime fired a warning shot over the bows of the other elite racers with an emphatic victory in the 45km one-day Cartime FastDrak held in tough low water conditions on the Umzimkulu River.

The popular ultramarathon normally covers the full 65km course of the two-dayN3TC Drak Challenge but due to the sudden dearth of rainfall that left the river running low, the organisers opted for a short-course option starting at the Trout Hatcheries, cutting out the first 20km through the steep and rocky Valley of a Thousand Rapids.

Kime found himself drawn into a tough battle with two classy Dusi paddlers Thulani Mbanjwa and Sbonelo Khwela, and was only able to make a break that set up his nine minute victory margin in the closing stages of the race. The win was Kime’s third triumph in the relatively new event, after wins on 2011 and 2012.

Kime, showed in the FastDrak win against a strong field that he has shaken off the effects of the glandular fever that side-lined him in the third quarter of the year.

After being catapulted into the canoeing limelight by winning the 2013 K1 Dusi title, Kime has shown that he can perform consistently well against the established Dusi stars, and he is distinct threat to joining the list of elite stars who have won the K1 Drak crown.

Kime is one of the greatest fans of the Umzimkulu, and is a regular feature on the river, especially once word gets out that the river level is high.

He often teams up with the prolific Haw and Houston families for these trips to Underberg to enjoy the river, which has made him one of the most knowledgeable elite paddlers when it comes to understanding the subtle nuances of the steep rocky river.

With his studies at Stellenbosch now behind him, Kime can focus on the coming summer KZN season, culminating in the defence of his Dusi K1 crown.

However the modest Pietermaritzburger would love to make his mark on the Drak podium racing on the river that he holds in such high regard. His bid to make to Drak top three was given a boost by his recent FastDrak win as he dispatched the challenges of two of the so-called Dusi “Fantastic Four”.

“Sbonelo (Khwela) is paddling so well right now that he could be a factor in the Drak for sure,” said Kime. “Bungee (Thulani Mbanjwa) is also back to his best form from what I have been able to see from races like the recent Ozzie Gladwin.”

“Hank McGregor and Andy Birkett are the two best river paddlers in the country by a country mile at the moment. I will be chuffed to get onto the podium at the Drak. That will give me a very good idea of where I am in the build-up to the Dusi.”

Abby Adie won the women’s race comfortably enough from Jena Ward and Epworth Under 16 wiz Cana Peek, underlying that her Dusi training is on track as well. It was Adie’s second FastDrak victory.

Damon Stamp won the junior title in his last outing as an Under 18 athlete, holding off Alan Houston to take the junior boys title.

The N3TC Drak Challenge 2014 starts on 24 January at Castleburn Bridge outside Underberg and finishes on 25 January at Early Mists Farm close to Coleford. More information can be found at www.drak.co.za