Kingsley Holgate Riders On A Mission To Save Lives 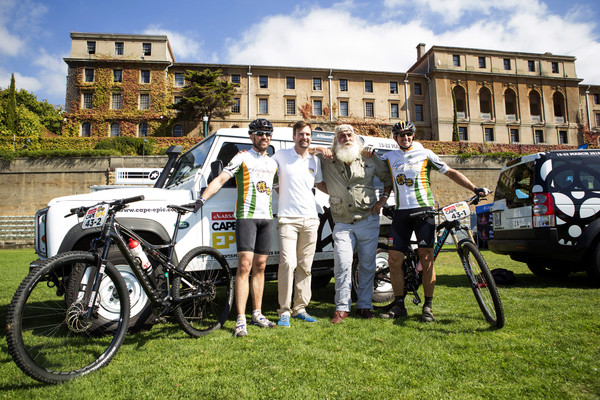 Mike Nixon met his Absa Cape Epic partner 5000 metres above sea level. Jasper van Dijk stumbled into Nixon’s tent at the base camp at K2. He had five cups of tea and when Van Dijk, who is from the Netherlands, eventually thawed out the two men started talking about their passions. “Jasper told me he loved mountain biking. ‘Have I got a race for you,’ I said.” Four years later, the two mountain bikers teamed up to take on the Absa Cape Epic. The pair are riding for the Land Rover-sponsored Kingsley Holgate Foundation, whose mission is to bring humanitarian aid to remote villages all over Africa.

The Foundation aims to use adventure to improve and save lives throughout Africa. “We have three major humanitarian projects, providing malaria nets, water-purifying LifeStraws, and Right to Sight glasses,” said Nixon.

According to Nixon, there’s a wonderful synergy between Land Rover and mountain biking. “We need to go to outlying villages and these two can get you to places that are properly off the beaten track.”

Land Rover has come aboard as the official vehicle sponsor for this year’s edition of the Absa Cape Epic, supplying vehicles including Discovery sport, Discovery and Defender models, to the eight-day stage race. Land Rover ambassador John Smit, the former Springbok captain, is taking on the Untamed African MTB Race for the second time.

Holgate, the grey-bearded intrepid explorer, came to wish Nixon and Van Dijk good luck for the rest of their Cape Epic adventure after they completed Sunday’s prologue on Table Mountain. Holgate, a fellow of the Royal Geographical Society and the most travelled man in Africa, had just had a knee replacement, but said he was ready to explore again. He is preparing to embark on an expedition down the Zambezi on a 10-metre inflatable boat, which is big enough to take a Land Rover and mountain bikes.

Nixon had recently joined Holgate on an expedition in the Ethiopian highlands, where they had shared in the rich cultural ceremonies and traditions of Ethiopia. It was also where, at 3500m altitude, Nixon had trained for the Cape Epic. “There were incredibly steep passes that were 25km long,” he said.

Holgate said mountain bikers were in a great position to help improve lives. “They can make training meaningful by going on great rides and then doing their bit, refereeing soccer games or getting involved in Rhino conservation or anything.”

Nixon, who is as tough as a Land Rover, has completed all 11 Absa Cape Epic races so far – one of only a handful of people to do so. “I think there are only five others,” said Nixon. “I heard there will be a special prize for the last one standing. I’ll keep on riding for as long as my body allows. This is the best mountain bike race in the world – and it’s right on my doorstep. How lucky am I?”