Kleinhans and Reid a lethal combination at DUTOIT Tankwa Trek 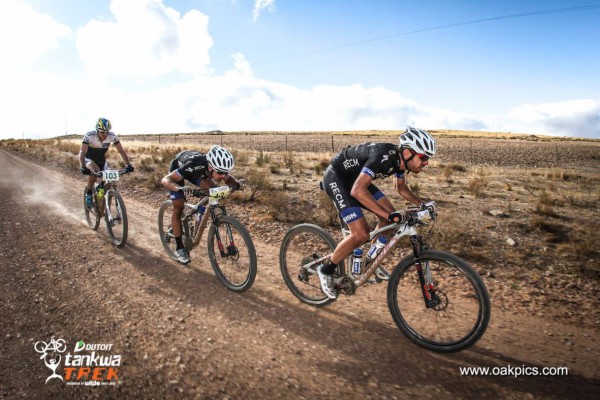 The racing was red hot around Valentines Day this past weekend at the start of the DUTOIT Tankwa Trek as Team RECM’s James Reid, fresh from his Trans Hajar win in Oman two weeks ago, and Erik Kleinhans set the singletrack alight on day one through the Witzenberg Valley, to split the lead group and open a decisive gap over the rest of the field.

Kleinhans and Reid spent the majority of the stage alone, to finish the stage just over four minutes ahead of the two chasing teams, Red-E Blend and Team Contego.

In the women’s race, RECM’s Ariane Kleinhans and Cherise Stander, raced side by side with Ascendis’ Robyn De Groot and Jennie Stennerhag for most of the opening day. The Ascendis pair put a big effort in after the third water point to win the stage, and pulled away from Kleinhans and Stander to open up a lead in the overall standings.

Predictably, the toughest day was also the longest day of this year’s race, with the eighteen kilometer Merino Monster proving to be an ugly snap in the latter half of the stage. With Reid visibly struggling towards the top of the climb and Red-E Blend closing in, Kleinhans nursed his young partner and still managed to win the King of the Mountains at the top of the climb out of the Ceres Valley.

The RECM pair then opened up a small gap on the final descent to add a further 90 seconds to their cumulative time over Red-E Blend’s Darren Lill and Waylon Woolcock.

The leading two women’s teams of RECM and Ascendis started Merino Monster together, but Ascendis edged away on the steep slopes of the final climb. De Groot and Stenerhag won the stage to further extended their lead on Kleinhans and Stander in the overall standings.

The final stage, relatively flat and fast, was won by Lill and Woolcock (Red-E Blend), but their margin was not substantial enough to affect the overall standings, with Kleinhans and Reid finishing under thirty seconds behind, wrapping up the overall title at the DUTOIT Tankwa Trek by over five minutes.

Ascendis’ De Groot and Stenerhag made it a clean sweep on the final day, securing the overall title with Kleinhans and Stander finishing second for the third consecutive stage, just under 7 minutes behind on general classification.

Team Captain Erik Kleinhans commented, ”The DOTOIT Tankwa Trek has grown in stature, and over the last three years has become not only a great test for Cape Epic teams, but also in its own right an important stage race to win. For James and I, this was always going to be a big early season goal and we are very happy with the overall victory and two stage wins!”

“Our plan was to race aggressively, especially on the first stage as the route really suited our strengths, with plenty of single track and short, punchy climbs. The partnership between us worked really well.”

Reid added, “Tankwa was my first proper race with Team RECM and I thoroughly enjoyed it, even though I didn’t have the best legs over the weekend. The race itself is one of the best on the scene – there is something for everyone from steep, long climbs, to fast tricky single track with some incredible views thrown in. Erik is in incredible shape at the moment and he was really patient with me, leading from the front and never getting worked up or flustered. We rode a calculated but aggressive race and I’m super happy to come back to this race and have won it again.”

“Cherise and I managed to win last year’s edition but this year the competition in the ladies field was quite a lot tougher with Jennie Stennerhag and Robyn de Groot teaming up. Team Ascendis were stronger than us this weekend, but Cherise has no fear of speed on the downhills and that definitely pushed me out of the comfort zone. She can start really fast and has a lot of power on the flats, which is a bit of a weakness of mine, so the Tankwa Trek was the perfect preparation for the Cape Epic for me.” said Ariane Kleinhans