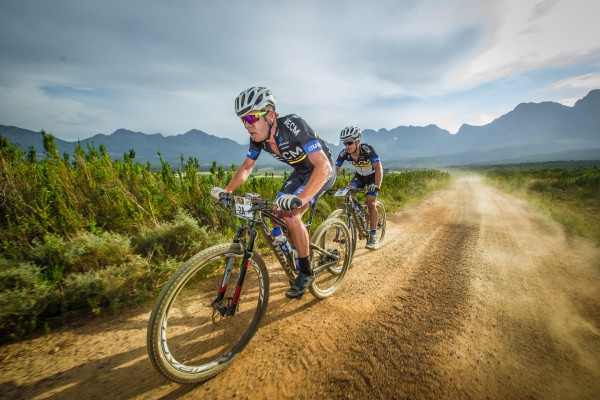 Kicking off at the picturesque Lourensford Wine Estate (Somerset West), Stage One saw 1300 mountain bikers (650 teams of two) toe the line to take on the 72km route that featured a 1620m ascent.  Finishing at Oak Valley Wine Estate (Elgin-Grabouw), stage highlights included the new Wedderwill and Knorhoek single tracks.  The A-2-Z Trail in the Grabouw Forest left lasting memories.  Sections X and Y, however, did not form part of this year’s route.

Erik Kleinhans and James Reid of Team RECM set a blistering pace, completing the 72km stage in an awe-inspiring time of 03 hours 43 seconds.  According to Kleinhans, W2W is an important race for the team.  “This is our last race in the RECM colors.  The route was great as always – lovely racing, punchy, entertaining and flowing.  We led from the beginning, but then James had a bit of a run in and we lost about a minute and a half.  We managed to make up for it though.  Taking the stage is great, but an overall win will be the ideal ending.  Going into Stage Two, we won’t race as aggressively as today.  The course suits our riding style.  We’ll just try to stay with the front guys.”  Christoph Sauser and Konny Looser of Team Investec Songo came in second, while Gawie Combrinck and Johann Rabie of Team EAI South Africa finished third.

Robyn De Groot and Jennie Stenerhag of Team Ascendis Health claimed victory in the women’s race with an impressive finishing time of 03 hours 35 minutes 13 seconds.  “Today’s trails were awesome,” said De Groot.  “The route included minimal district road and really nice single track.  This was good, proper mountain biking.    We’ll have a three minute lead going into Stage Two, but in mountain biking that is nothing.  We’ll forget about the lead and start new.  The race isn’t over until we reach the finish line.”  Candice Neethling and Ariane Kleinhans of Team RECM Ladies came in second, while Theresa Ralph and Samantha Sanders of Team Galileo Risk Valencia finished third.

Team Bigla’s Carl Pasio and Ashleigh Moolman-Pasio’s finishing time of 03 hours 47 minutes 33 seconds secured them the top spot on the podium in the mixed team category.  “The stage was a shock to the system,” laughed Moolman-Pasio.  “As a road cyclist I don’t get to work my arms much, the portage over the wagon trail was hard.  It is really nice to be able to ride with my husband.  We just wanted to have fun, but our competitive instinct kicked in.  It’s hard not to race when it’s what you’re used to doing.”  Yolandi Du Toit and Gordon Alan of Team Garmin Navworld came in second, while Andreas Studer and Carmen Buchacher of Team Craft Cycling finished third.