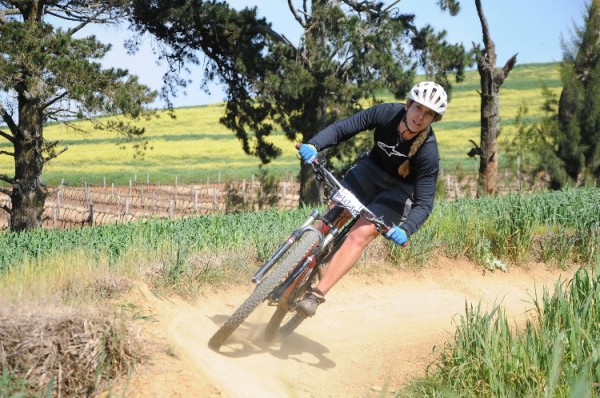 at Revolution Cycles in Cape Town on Thursday evening, 17 September 2015.

“I’m attracted to the fun factor,” said Knipe.  “Enduro racing has a very chilled, yet super competitive vibe.  I entered the ISUZU MTB Enduro because it was local, included all my favourite Tygerberg trails and was organised by Stillwater Sports.  The most memorable part is that I got to do most of the event with my cousin.  Also chilling at a water point and still being able to podium is unheard of in other events.  The ISUZU MTB Festival is such a great concept.  You get to partake in more than one cycling discipline at one destination on one weekend and it’s for all age groups.  I will definitely be back next year.”  Louis-Bresler Knipe claimed victory in a lightning fast combined time of 15 minutes 39 seconds.  Gary Barnard came in second, while Mark Hopkins finished third.

According to Stow, it’s the diverse style of riding that attracts her to the sport of Enduro.  “You need to have a decent level of fitness and technical skill.  The ISUZU MTB Enduro was a fun day out at a great event with great people.  The event photographs perfectly captured the fun and beauty of the trails that we were privileged enough to ride.  I am already looking forward to next year’s event.”  Ila Stow claimed victory in the women’s race in a combined time of 19 minutes 06 seconds.  Tanya Stow came in second, while Linda Van Wyk finished third.

In true mountain bike festival style father and son duo Mark and Luke Moir opted to complete the ISUZU Enduro Ride together.  “Riding with Luke is getting tougher and tougher as he keeps getting better,” said Mark.  “The Euduro was so much fun and featured a fantastic social vibe.  The festival is a superb idea as the whole family can get involved.  Luke, my wife and I did the Team Relay together, while I also competed in the 60km Fedhealth MTB Challenge on the Sunday.”