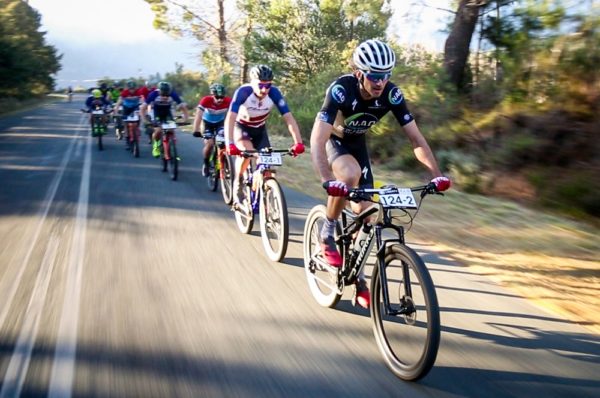 HB Kruger and Matt Beers timed their attack to perfection to snatch the stage win on the second day of the Liberty Winelands Encounter mountain-bike race in Franschhoek today.

The ASG-NAD pair outsprinted stage one winners and overnight leaders Gert Heyns and Arno du Toit at the end of a 48km loop from the Le Franschhoek Hotel and back.

Kruger, from Paarl, and Beers, from Kenilworth in Cape Town, crossed the line in 1:42:09 with the DSV Pro Cycling duo three seconds adrift.

Dylan Rebello and Marco Joubert of Imbuko-Momsen completed the podium.

Heyns and Du Toit’s combined time of 3:34:28 puts them just under two minutes ahead of Kruger and Beers in the general classification with one day to go. Rebello and Joubert are in third.

Kruger, who won the title alongside the now retired Waylon Woolcock last year, said it was a quick and aggressive stage, “with a lot less climbing than we thought”.

“There was a 10km neutral zone on the tar until we turned up Matoppie Hill, which is a steepish, rocky climb,” he said.

“We had a good tempo and Matt and myself, along with Gert and Arno, managed to get away as we went up that section.

“I did drop off slightly at one stage, but we managed to get back to Gert and Arno at the top and we rode together for the rest of the way.”

Describing it as a “flattish, rough course”, Kruger, who won the seven-day Liberty TransCape MTB Encounter with Stuart Marais in February, said it was difficult to make a move to create a gap.

“We raced together, not pushing too hard, but making sure we were checking each other out.

“Coming into the finish we saw an opportunity to go for a stage win and we came sprinting out of the last single-track.

“This was in the last kilometre and Arno came around us but Matt and I knew we just had to stay ahead of Gert and we were able to do that.”

Kruger said although time was running out, they were still focused on making up time on the final stage.

“The stages are relatively short so it’s really difficult to create a big gap,” he said.

“But tomorrow has some testing areas, too, so we will definitely not just give it [victory] to them.

“We will be trying our best to see what opportunities arise to make up some time. We are definitely keen to win what is a very special event.”

Kruger fell ill after last month’s Cape Epic and was on antibiotics for a period.

“So yesterday was a bit of a shock to the system, but my partner Matt is looking really good so it’s nice just to sit behind him and follow his moves,” he said.

They finished ahead of Carmen Buchacher and Paris Basson, with Everett and Anna Haywood third.

The stage winners consolidated their overall lead with their combined time of 4:02:50 giving them a buffer of more than half an hour over Buchacher and Basson.

Louise Ferreira and Marleen Lourens continued to dominate the women’s category, winning the stage in 2:13:36 to increase their sizeable lead in the overall standings.

They were followed home today by Ilse Viljoen and Jana Kruger, with Alta Kriegler and Sunette Beyers third.

Tomorrow’s final stage of the Liberty Winelands Encounter, presented by STANLIB, will be contested over 50km between Le Franschhoek Hotel and Nederburg Wine Estate near Paarl.