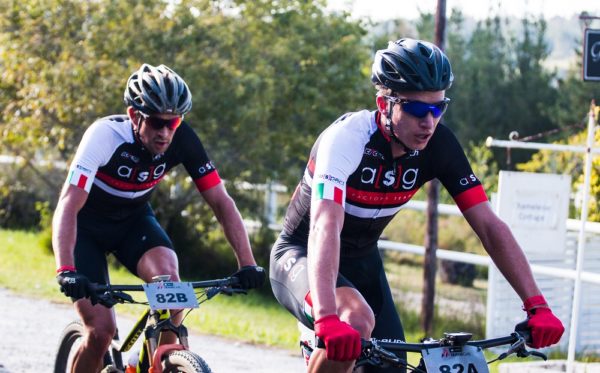 The ASG-Ellsworth team of HB Kruger (front) and Stuart Marais claimed victory in the men’s Elite category on the first stage of the Liberty TransCape MTB Encounter from Knysna to Wilderness in the Western Cape today. The seven-stage 614km race finishes in Franschhoek on Saturday. Photo: Robert Ward

HB Kruger and Stuart Marais delivered a strong statement as they led the field home in the opening stage of the Liberty TransCape MTB Encounter today.

The ASG-Ellsworth outfit drew first blood in the 614km seven-day race between Knysna and La Couronne Wine Estate in Franschhoek, but Kruger was quick to acknowledge they still had a long way to go.

They covered the 71km stage from the Western Cape town of Knysna to Wilderness in 2:23:47, about three-and-a-half minutes ahead of Norway’s Eirik Fiskvik and Thomas Engelsgjerd (Team Happysalmon) in the UCI men’s category.

The Paarl-based Kruger said there appeared to be good international competition and that he and his Durban-based teammate would have to focus throughout the race, which boasts UCI status for the first time.

“There is some stiff opposition, with quite a few European teams, and you can never relax and say you have it in the bag,” said the 26-year-old who showed his versatility over the Christmas break when he won the 25-mile race at the Paarl Boxing Day track meeting.

“Also, with a mountain bike race, anything can happen and you never win a race of this nature on the first day.”

The South Africans took the lead on Phantom Pass, one of seven categorised climbs. It presented the field with their first proper challenge immediately after the 5km neutral zone through the outskirts of Knysna.

“As we turned off the N2 some of the teams went to the front and we sort of waited a bit until we took the lead about 6km into the stage,” added Kruger.

“We were able to set our own pace and that was enough to get a bit of a gap. After that we just maintained it and tried to keep it steady and to keep the bikes in one piece.”

He said they had about a minute’s lead over Fiskvik and Engelsgjerd early on, but gradually increased the gap as the day unfolded.

Kruger felt the route was challenging – especially with the corrugations on the gravel roads towards the end.

“For instance, the last 5km were flat but corrugated so it does take it out of you and there will be some tired legs at the start tomorrow.”

He said their strategy in the Liberty TransCape Encounter, supported by STANLIB and Volvo Cars, was to build a lead but also to keep something in reserve.

“You definitely don’t go out all guns blazing and the aim is to get in front but to keep something in the tank for the remaining days.”

Britain’s Catherine Williamson, who won the mixed title last year, and Belgium’s Kristof de Neys led the way in this category after joining a group of about 10 riders after the first climb.

Williamson and De Neys, who rides under the LawPack banner, finished in 2:38:05 to establish a comfortable lead over Reinette Geldenhuis and Wolf Stinnes (Woolies Trance) and third-placed Donald and Nicolle Weir (Weirdos).

“When you get with a group of guys like that, you tend to go a little quicker,” said Williamson. “So we got pulled along really nicely, with Kristof doing his fair share of work at the front.”

Having ridden together before, Williamson said they had once again clicked well as a team.

De Neys, who divides his time between Knysna and Belgium, said he was making his third appearance in the TransCape and he knew the trails in the area well.

“We just tried to stay in our power zone and not expend too much energy on the first day,” he said.

The UCI women’s category was won by TransCape debutants Janine Muller and Mari du Toit (Oakley Group), both from Pretoria, in 3:08:19.

“I must admit, I did expect a bit more climbing, but we managed to get away early and luckily there was no one really pushing us from behind,” said Muller. “It really was a good day.”

Tomorrow’s second stage will take riders over 86km and 1 900m of ascent from Wilderness to Mossel Bay.