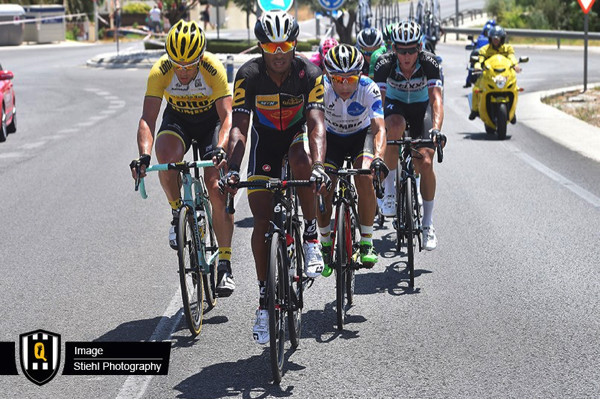 No change in General Classification race

The 19th stage of the Vuelta a Espana saw the break of the day decide the stage win once again. Today it was Alexis Gougeard (AG2R La Mondiale) who tasted victory.

Team MTN-Qhubeka p/b Samsung had Natnael Berhane in the 24 rider move that went clear inside the first 10km of the stage. With no breakaway riders of danger to any of the riders in the top 10 on GC, they were allowed to get as much as a 16 minute lead during today’s 185km stage.

With it obvious that the break were going to survive, the escapees then started to look at each other as the race approached the cat 2 La Paramera climb, which topped out with 19km to go. The attacks came thick and fast and Natnael launched a move of his own on the lower slopes but a tailwind made it a fast paced climb and difficult to get any sort of a lead.

Gougeard, who went just before the climb even started, would reap the rewards of throwing caution to the wind by arriving at the finish alone with 40 seconds to spare. The rest of the chasers followed in ones and twos with our Eritrean champion coming home in 13th place.

Back in the peloton there wasn’t all that much action as Movistar tried to up the pace on the climb but it just wasn’t hard enough to make much of a difference. It was only on the short cobbled section coming into the finish that saw a few seconds gained here and there but nothing substantial. Louis Meintjes remains 10th on GC with just 2 stages to go.

Jean Pierre Heynderickx – Sport Director
Today we had to be aware when the break went, making sure the 6 riders behind Louis weren’t trying to get away. Natnael did a good job to get into the big break that did go away. In the final it became quite tactical in the front and with only 1 rider there it was not easy to gain the upper hand. Louis lost a few seconds on the final cobbled climb but it was minimal so we can be happy with our stage. It’s just two stages to go now, 1 hard stage and the final in Madrid.