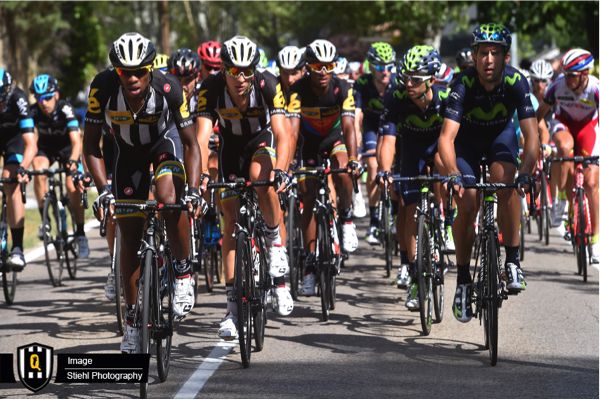 The final stage of the Vuelta a Espana ran its course yesterday evening with John Degenkolb (Team-Alpecin) winning the final sprint in Madrid. Kristian Sbaragli, our stage 10 winner was again in the fold and took 8th position on the line.

As expected the local circuit in Madrid was a true spectacle as spectators got to see the riders who have been racing their way around Spain for the last 3 weeks up close and at high speed.  After a number of really tough mountainous stages, the final stage of the Vuelta saw the sprinters teams allowed back into the limelight. Giant-Alpecin was keen on snuffing out any late breaks for glory for their man John Degenkolb. MTN-Qhubeka p/b Samsung were all too keen to give Kristian another shot at the stage win too.

So after a gentle start to the final stage that included some champagne sipping and memory sharing, the racing got underway with just on 50km to go. MTN-Qhubeka p/b Samsung rode in support of Kristian for the stage while also ensuring Louis Meintjes was also safe and sound in the bunch right through the inevitable bunch sprint. The sprint was one that Degenkolb was not going to lose after an excellent leadout by his team.

In the overall Fabio Aru (Astana) took home the red jersey ahead of Joaquim Rodriguez (Katusha) and Rafal Majka (Tinkoff-Saxo). Louis would finish safely in the pack to claim a historic 10th place overall, becoming the first African rider to finish in the top 10 of a grand tour. A truly remarkable achievement for both Louis and our team.

Together with Kristian’s stage 10 victory our team was able to achieve a total of 9 top 10 stage finishes. We were also only 1 of 6 teams that got all 9 riders to the finish in Madrid. The fact the 7 of our riders were from Africa and 3 were grand tour debutantes, makes the feat all that much sweeter for our African team. Our #BicyclesChangeLives campaign also reached the home stretch during the Vuelta and we are now less than 900 bicycles away from reaching our 5000 goal.

Louis Meintjes – Rider
This top 10 result belongs to all Africa. I couldn’t have achieved this result without the team. To have 7 of the riders coming from Africa and achieving the results we did, it really is something special. I am really happy with my result, it was a bit more than I expected to achieve at this Vuelta.

Jens Zemke – Head of Performance
Once again this is a pretty historical moment for us. This was our 3rd grand tour after 3 years in professional cycling with MTN-Qhubeka. To achieve a top 10 in a grand tour is like another dream come true on what has been a very fast track. In our goal setting we hoped to achieve a stage win. With Kristian we got our win but in addition we had numerous top 10’s, we were part of the racing every day, in the breakaway’s, chasing on the front and on top of it all 10th on GC. It was a fantastic Vuelta for us. Also the team came here with 7 African riders, to be a part of the race as we were, it is just spectacular for African cycling and we can be proud of our team. Without all our partners and support staff, who worked extremely hard these 3 weeks, buying into our team’s philosophy of #BicyclesChangeLives, these results would not be possible.