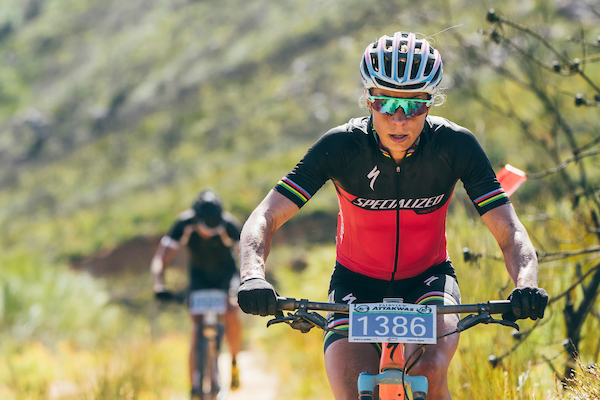 Annika Langvad climbs the Queen of the Mountain climb, having distanced her nearest rivals, during the 2017 Fairview Attakwas Extreme MTB Challenge. Photo by: Ewald Sadie/Dryland/SPORTZPICS

It was Langvad’s debut appearance at the demanding 121km event, which is considered South Africa’s toughest one-day mountain bike race. She clocked a time of 05:25:55 to slice almost five minutes off the previous record of 05:30:58, set by five-time winner, Ariane Lüthi in 2015 in cooler, calmer conditions.

From the first climb at 5km, it was essentially a four-rider battle for the coveted title. De Groot, Lüthi, Stenerhag and Langvad moved off the front and stayed close together for the next 25km through the Karoo, an inhospitable semi-desert region. But at the summit of Sonnop, a technical ascent at 30km in, Langvad held a 15-second lead over De Groot and Stennerhag with Lüthi cresting a minute-and-a-half later in fourth.

De Groot and Stennerhag then rejoined Langvad and the trio entered the Attakwas Reserve together with De Groot impressing on one of the technical climbs, riding away briefly from Langvad and Stenerhag, who had to climb off and push.

But Langvad, a former three-time marathon world champion, three-time Absa Cape Epic winner and current XCO World Champion, was in her element through the Attakwas Reserve, an isolated wilderness region, which includes a series of impossibly steep climbs and rough, rocky descents. She took the lead, claimed the Queen of the Mountain title and went through Waterpoint 4 (with 35km remaining) holding a 2:00 lead over De Groot.

“I had a really good time. I tried to keep reminding myself to just enjoy this. But you know, when you’re sitting there pedalling in so much pain, it’s hard to enjoy the views. But when I did look up it was amazing, especially coming out of the Attakwas valley. It was so beautiful, but you could have turned down the headwind at the end of it,” smiled a content Langvad.

“Obviously we come here to win, but losing to Annika isn’t too bad. It’s an honour to race against her. I was pretty surprised that I was able to stick with her as long as I did. I enjoyed the race. It’s a good start to the year, I’m happy with where I’m at,” said De Groot.

For full results and other race information, visit www.atta.co.za.