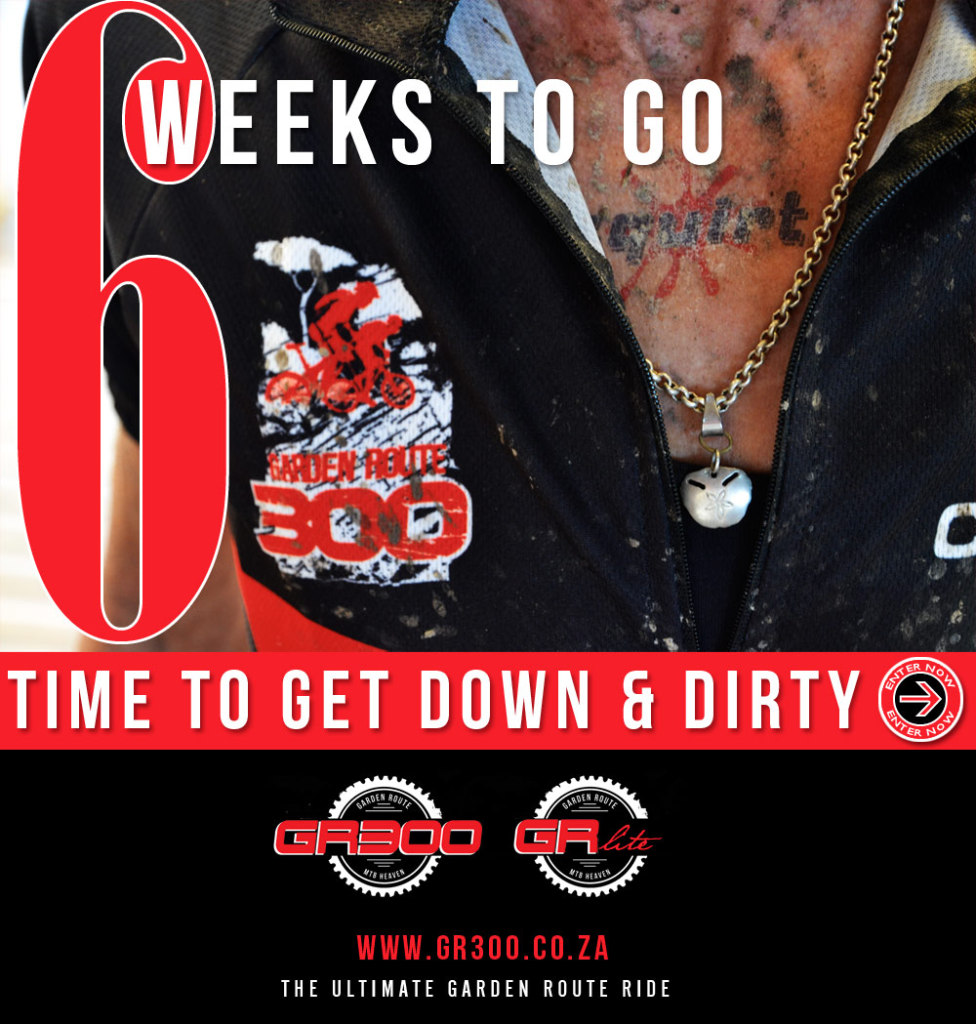 In 2008, when the last Epic left Knysna and became a Cape Town based event my partner Pax and I, both previous Epic finishers ourselves, took the gap and created the GR300. Pax had been organising events for many years already but always for charities or at club level.   Initially, the intention was for a one day only race, but after the route prep began, we soon realised that one day was not enough to explore and boast our spectacular surroundings and magnificent local terrain. And so, the 3 day GR300 event was born.  The inaugural event in 2011 hosted 250 riders and was a massive success.  It was a humble beginning with minimal prizes, but thanks to our only sponsor – Cannondale, we could give away a great bike!  Knysna Tourism was also a huge help in that first year and helped tremendously to put the event on the MTB map.  After that first race we were inundated with praise mail from literally 100s of riders.  It was a fantastic feeling, which hasn’t stopped!

Since then the race has developed a life of its own with rider numbers increasing annually into what is now a fully subscribed event and lauded by most who have participated as one of THE best.

Probably one of the factors which contributed most to the success of the GR300 is the awesome route itself.  The MTB riding in the surrounding areas of Knysna – with the thick indigenous cool forests, the vast open mountainous views coupled with unrivalled coastal beauty makes this a route which is hard to beat.  The route director has put together the route in such a way, that each day is vastly different from the previous day – making each day its own adventure.  Although the basics of the route in 2015 will stay the same as last year, some new trails keep it exciting from one year to the next.    The 2015 edition also introduces a new element which includes a short route option every day for those not keen on the epic distances.  Riders doing the long route will do 90 km on day 1, 100km on day 2, and 85km on day 3.  The shorter route option distances will be 75km on day 1, 80km on day 2 and 75km on day 3.  There is something for everyone to enjoy.

The field is limited to 500 riders – this, we believe is another contributing factor to the success of the event. There are no queues for food, or grubby porta loos and at the Knysna -lagoon side start on day 1 and day3 at Thesen Island Harbour Town Quay Four.   Also, the limited rider numbers guarantee elimination of any bottlenecks en route – affording riders the opportunity to really enjoy and free ride the many single track trails.

Last year we added a compulsory portage – a 400m up and 300m down hike-a-bike through a magnificently beautiful fern filled valley in the pristine Garden Route National Park – that caused some controversy!! – Most enjoyed it, some not …  we LOVED it.  It’s there to stay!!

Because a large portion of the route encompasses the GRNP and other para-statals like Cape Pine, there are many access roads where riders cross over from the single tracks.  Most of the water points are accessible by road and we always give participants a detailed map of spectator points and 3 water points to make it easy for supporters to spectate en route.  There is also an option for riders to buy spectator meals which allow riders’ supporters access to the rider race village and to enjoy all meals with their riders.

What makes the GR300 so special?

I think that there are many factors which have led to the success of this event and make it so special.  The route itself is the most obvious and foremost, but in a nut shell, this is an adventure weekend away – a lifestyle event.  And because its in Knysna, there are a million different accommodation suppliers, most offes include breakfast, which makes this a hassle free, adventure filled weekend – not only for riders, but their families and friends too.

Are there any of the big names in MTB (locally/internationally) taking part next year?

YESS! More than ever before!   Thus far, the start line will boast the likes of Team Bulls rider, Stephan Sahm who has teamed up with Timo Cooper – back for his 4th time. Wolfgang Krenn riding with Craig Boyes for team Asrin. Catherine Williamson is also back for her 4th time riding with Niezaam Essa in the mixed category. – Shan Wilson – back for the 5th year – one of our Garden Route prodigies indeed! Max Knox has teamed up with Kevin Evans for their Epic Prep and David George is back riding with Shane Thomson. Previous podium contenders include Nico Pfitenmaier, Timo Cooper, Daniel Gathof, Shan Wilson, Yolandi de Villers, Catherine Williamson etc. Taking place 3 weeks before the Epic, it is ideally placed as the recommended Epic prep event.

What is at stake, besides the honour of winning – prize money for instance – or medals?

Lacking a title sponsor in 2015, the prize purse is an issue under contention. We are certainly doing what it takes to make this an event worthy of such pro participation.   All riders will receive fantastic complimentary  CRAFT limited edition kit as part of their entry, as well as a CRAFT finisher Polo shirt plus the usual finisher brag item.  But this event is about the experience – and participation in the ULTIMATE ride is the ultimate prize.

Are entries still open for the 2015 event and if so, how do you go about it, how much does it cost and are there ample accommodation available for participants and their support teams/family?

Entries are open and the last few spots still available.  Entries will close strictly at 500 riders.  The cost per team is R 7 300 for 2 riders – one of the best value-for-money rides to tick off on the bucket list.  There is also a solo category at R 3 960 .  For  accommodation, there is a link  directly from the GR300 web site where many local establishments have offered riders and their families special packages for the weekend.  First come, is first served.  For more info contact admin@gardenrouteevents.co.za.  You can enter at www.gr300.co.za