Laurels for Greipel, tears for Bouhanni 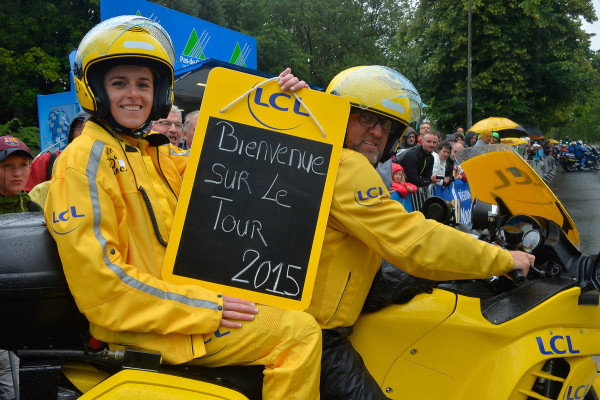 Sprinters were seen as the leading roles of stage 5 and they were, sometimes unwittingly. Andre Greipel logically snatched his second win of this Tour in similar weather conditions as the first in the rain and wind of Zealand. By contrast, France’s Nacer Bouhanni, who was looking forward to this long stretch along the battlefield of WWI, crashed after 11 km and was forced out prematurely. In the finale, Greipel overpowered Peter Sagan and Mark Cavendish to strengthen his green jersey while another German, Tony Martin, retained the yellow jersey so convincingly conquered in Cambrai.

The stage, seen as a possible break after four hectic days, was not to be because of rainy, windy conditions in the region. As a result, one of the favourites of the day in case of a bunch sprint, France’s Nacer Bouhanni, was forced out of contention after 11 km, shortly before the French WWI National Necropolis, when he crashed with several team-mates. The former French champion was driven away by ambulance. His team-mate Nicolas Edet had been at the start of the first move, also involving Pierre-Luc Perichon (BSE), who went on his own and remained in the front for 90 kilometers. 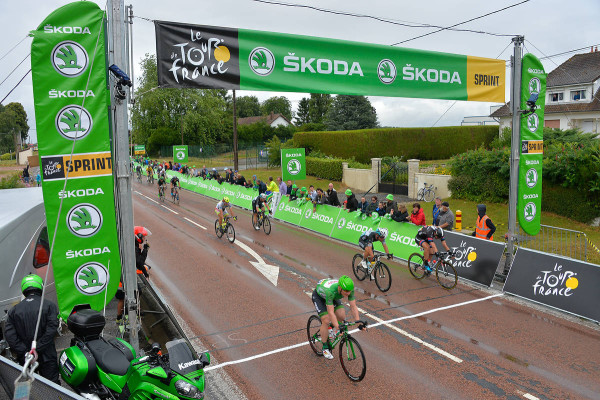 On slippery roads, crashes were many and involved riders of the calibre of green jersey holder Andre Greipel, French sprinter Bryan Coquard, Belgum’s Greg Van Avermaet and Trek Factory leader Bauke Mollema of the Netherlands. All escaped unhurt and his slip-up did not affect Greipel, who won the bunch sprint behind Perichon in Rancourt (km 89.5) to add 17 points to his green jersey tally. After the sprint, the bunch regrouped and splits took place when Team SKY, BMC and Tinkoff-Saxo sped the tempo shortly before a sharp turn at kilometer 110. Richie Porte, Rafal Majka Thomas Voeckler or Peter Kennaugh were among the riders dropped.

Greipel was too strong

The bunch seemed decided to wait for a mass sprint when, 25 km from the line, another major slip-up involved some 30 riders, among them Frenchmen Thibaut Pinot and Jean-Christophe Peraud, both on the Tour podium last year. They made it back in the bunch as the sprinters trains organized. John Degenkolb’s Giant Aplecin and the royal guard of Mark Cavendish – Michal Kwiatkowski and Tony Martin – led their sprinter out but Greipel, far behind at 300 metros, finally surged for an emphatic win.