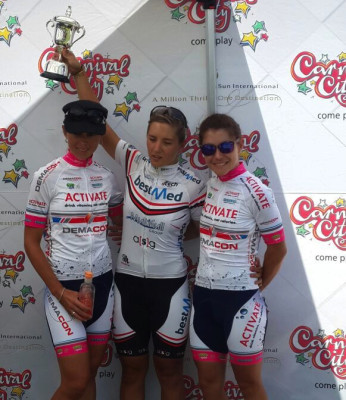 Team Bestmed-ASG-Multihull’s Kim le Court claimed her first win of the 2015 season at the Carnival City Macsteel National Classic in Brakpan on Sunday.

Mauritian Le Court positioned herself perfectly in the final four-rider selection to take the finishing sprint ahead of Lynette Burger and third-placed An-Li Kachelhoffer, both of Activate-Demacon.

The 18-year-old, who claimed an impressive victory in the Amashova Durban Classic last year, said the flatter course had suited her but that the wind had played a major factor in the day’s racing.

“After 40km it started to get very windy and there were huge gutters, so the racing was quite hard and you had to get the right wheel.

“It was quite stressful because I was the only one from my team left towards the end, so I had to rethink and be clever.”

Le Court said she saw her first tactical opportunity to split the big bunch on a long, draggy section.

“So I went to the front and paced as hard as I could. There was a huge gutter and I went completely to the left so that no one could take my wheel.”

Her strategy paid off and when she looked back at the top of the climb there were just eight riders left.

“We paced until about 70km into the race and then the attacks started coming. I attacked twice and had to take a lot of attacks from the Activate Demacon girls because there was nobody left to help me.”

With just 5km to go, the racing was down to just four riders.

“There was a triathlete pacing hard up front and An-Li was on her wheel and then Lynette was third and I was sitting on.”

Le Court said she knew then that she was well placed to watch danger woman Burger.

“I knew she was a good sprinter, so I waited for her to make her move and when she started standing up I went and it all worked out.”

Le Court has been steadily building her early season form, taking fifth in the Dis-Chem Ride for Sight and third in the ASG Berge en Dale last month.

“It’s just getting better and better and, after today, I’m feeling mentally stronger too.”

She said she was looking forward to her next race – the five-day Bestmed Tour de Boland – in the first week of March.

“I’m confident in tour racing. I did the tour last year and I’m excited to be racing it again this year and as part of a new team.”

Le Court’s teammates Desray Sebregts and Azulde Britz triumphed in the veteran and U16 racing categories respectively, wrapping up a trio of wins for the team.