Learners team up for “Trifecta” in triathlon 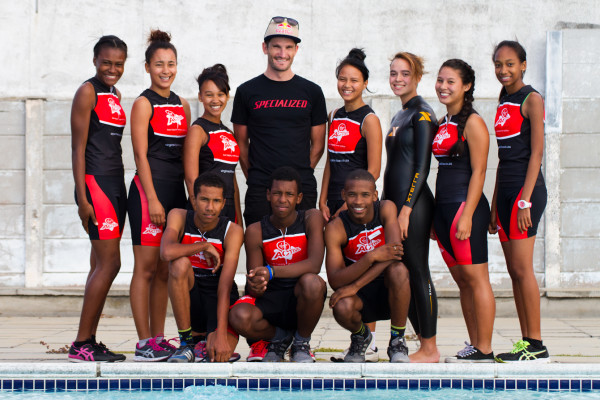 Learners from Holy Cross High and Lavender Hill High will soon be experiencing the adrenalin rush of a triathlon as they team up to compete in a relay event at this year’s Discovery World Triathlon in Cape Town. As part of the Virgin Active Future Crew Triathlon team these nine learners – aged between 15 and 18 – will be doing what they do best of three sports disciplines – swimming, running, cycling – on a slightly short course than the full triathlon but at the same time as the world’s best triathletes.

The tri-team received an unexpected surprise during a recent training session when Richard Murray, South Africa’s top triathlete and ranked 6th internationally, popped by to give them words of encouragement and some race-day tips.

The three Virgin Active tri-teams are made up of Leigh-Anne Maroon (16), Margot Sheppard (17), Bianca Lakay (18), Aqueelah Taljaard (15), Ana Maquina (17) and Summer-Lee Deng (15) of Holy Cross High – an all girls school – who will undertake the swimming and running parts of the relay with Ashley Jacobs (16), Faiez Basardien (18) and Schalk Damons (18) of Lavender Hill taking care of the cycling. They young men are part of the Virgin Active cycling team who rode the Cycle Tour for the first time this year.

All of the learners were selected for their passion for the sport, their commitment to training and leadership potential and although a triathlon is a fairly new sporting ‘discipline’ at school level, they were all unanimous in their excitement at being part of this prestigious international event.

“Both these schools have phenomenal leaders in headmaster Faseeg Manie of Lavender Hill and sports coach Randal Arendse at Holy Cross High and the learners participation in the race is a tribute to the work they are doing to uplift their learners and to encourage them to strive to achieve greater things in their lives,” says Melody Arendse of Virgin Active.

“A recent Healthy Active Kids South Africa (HAKSA) Report Card 2014 from Discovery Health highlighted the importance of getting, and keeping, kids active,” says Arendse. “But, it also indicated that girls are significantly less active than boys, which is a concern. As a company we promote a healthy, active, balanced and happy lifestyle and by identifying these athletic young girls we hope to encourage others to participate in exercise or sporting events such as the triathlon.”

Murray detoured to Maitland between his swim and run training session to meet the teams and chat through how his triathlon journey began, pre-race preparation in terms of training and nutrition, as well what to expect on the day. He is a home grown Durbanville “boytjie” who is thrilled to be able to compete in an international event in his home town. Murray recently won his first ever triathlon World Cup in New Plymouth and is hoping that another win is on the cards in Cape Town. He recently arrived back from the World Triathlon Series held on the Gold Coast in Australia where he placed 5th.

He says he was a little disappointed at being placed 5th in Australia. “It certainly was not my plan especially as I was feeling good after my swim. But, it was my first Olympic distance race of the season so I now need to build on this performance for Cape Town. I am really looking forward to competing in front of a home crowd and my focus is clearly on a podium finish next Sunday.”

His advice to the team was welcomed as he calmed nerves, especially around the sea swim which can be a little daunting and the quick transition between the relay elements. The tri-team will be tackling a ‘sprint’ distance: A 500m swim, 20km cycle and 5km run. “By giving these youngster the chance to interact with a professional athlete such as Richard Murray, we hope to show them the potential of the sport and how by being willing to tackle challenges sporting or otherwise, they can determine their future. Our investment in the team includes the entry fee, sporting equipment, training and an equipment donation for the school,” said Arendse.

Virgin Active is the official health club sponsor of the event with the three disciplines – swim, ride, run – being the core sports replicated in the clubs. Over 50% of the athletes participating in the triathlon next weekend – in either the sprint or Olympic distances – are Virgin Active members.

The second Discovery World Triathlon Cape Town is on April 25 and 26 with the finish at the brand new Green Point Athletics Stadium. The route incorporates a swim outside Quay 6 at the V&A Waterfront, a cycle on the main roads through Mouille and Green Point and the run taking in the Green Point Urban Park. Around 130 elite (professional) triathletes from 80 countries are expected to participate in the full triathlon which is part of the ITU World Series. However, what makes this event unique is the fact that ordinary athletes have the opportunity to compete on the same ‘stage’ and race route, on the same days, as top international athletes.

Spectators will be able to watch some of the best triathletes in the world, as well as novices, competing on both days. For more information go to: http://wts.triathlon.org/