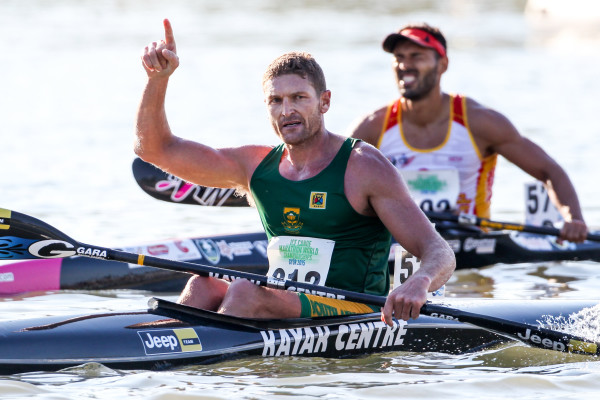 McGregor, who claimed both the K1 and K2 crowns in Oklahoma, USA in 2014, was a relieved man as he crossed the finish line fractions of a second ahead of Adrián Boros from Hungary and Spain’s Ivan Alonso after mid-race issues seemed to have ended his title hopes.

“I got here first in the end and I couldn’t be happier!” said the Jeep Team/Kayak Centre legend.

McGregor, like fellow South African Andy Birkett (Euro Steel), started well however after managing the difficulties of a seven boat lead group on the water, it was a rare mistake on the portage that put McGregor on the back foot going into the second half of the race.

“I kicked the pipe off my pump on the fourth portage and so I was full of water for the entire fifth lap,” explained McGregor.

“I got out for the fifth portage and the boat was so heavy I couldn’t even carry it so I had to stop and put the pipe back on which cost me a good 150 meters.”

“When you’re racing the best in the world, you don’t want to give anyone any edge and so I knew I had to dig deep!”

Having already launched a menacing attack just moments beforehand that had already fragmented the lead group, McGregor’s misfortune meant Boros and Alonso soon found themselves with a sizeable lead that they looked to take full advantage of.

Try as he may, McGregor could do little to close the gap however a lapse in concentration by Alonso at the start of lap seven saw him lose track of the number of laps he’d completed, giving McGregor the chance he needed to get himself back into the contest.

“When I saw Alonso turn in as if he was going for the last short lap then I knew he was tired and starting to lose it.

“I knew I had to catch back up before that top turn though if I was to stand any chance of winning.

“(Boros and Alonso) put in a big surge about 200 meters before the turn to try hold me off but I still managed to catch up and then I knew I needed one downriver leg to recover.

“(After resting up) I dug deep to get back in the front and once I put my nose in front then it’s hard to get past me and I’m really happy to have won!” said McGregor.

Despite having been a dominant figure for the first half of the contest, Birkett was one of the casualties of the mid-race shake up, eventually having to settle for an impressive sixth place in his maiden K1 Senior Men World Champs outing.

The K1 Senior Women’s clash saw Olympic bronze medalist Bridgitte Hartley and Nicole Russell finish twelfth and fifteenth respectively for South Africa as a fascinating battle for the overall spoils unfolded ahead of them.

Earlier in the day proceedings commenced with the K1 Junior Boys and K2 Junior Girls clashes.

A brave effort by Mark Keeling saw the Western Cape youngster in the mix for the first half of the junior boys race before the relentless pace eventually took its toll, ending any medal hopes the star of the future may have had.

Sunday’s third and final day of racing sees the spotlight shift to the senior age groups K2 clashes whereby Jasper Mocké (Mocké Paddling) will once again look to assist McGregor in doing the double and retain the world title the pair won in the US last year while Birkett and K2 partner Greg Louw (Knysna Racing) will also hope to feature at the sharp end of the race.

The senior women’s event will see Hayley Arthur and Donna Tutton make their first appearance at this year’s champs while U23 bronze medalist Jenna Ward and junior girls flyer Kyeta Purchase carry good momentum into the race after their immense K1 efforts on Friday.