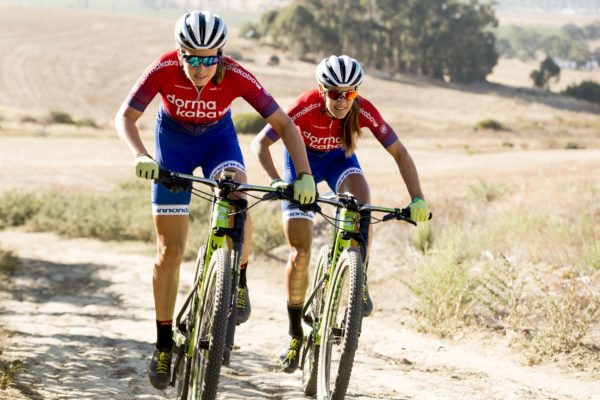 The Team dormakaba duo of Candice Lill (left) and Vera Adrian (right) were the beneficiaries of some poor navigational skills as they won the 2016 KAP sani2c and they will be hoping that they can produce another well-rounded display to win a second consecutive title when the 2017 Race gets underway on Thursday, 11 May.

Himeville – Team dormakaba’s Candice Lill and Vera Adrian will be defending their title at the KAP sani2c starting on Thursday, but the young duo know they will have to be at their very best to hold off a strong challenge from a pair of experienced South African champions.

Last year Lill (neé Neethling) and Adrian were able to take advantage of their main rivals’ navigational mistake on Day 2 and raced to a three-minute victory over Robyn de Groot and Jennie Stenerhag after the two teams spent most of the race within sight of each other in a tight tussle for superiority.

This year South African marathon champion De Groot has teamed up with cross country champion Mariske Strauss in what should be a potent combination, but Lill and Adrian have also improved since their early forays into racing as a team at last year’s event.

“The Epic this year was good for Vera and I as a team,” said Lill, who has married 2015 KAP sani2c winner Darren Lill since winning last year’s event.

“At the Epic you are at the limit and tired all the time, so there is very much of an emphasis on teamwork and that can only make a partnership better.

“I think we are now developing into a really good partnership. We are both still quite young – she is a only a year younger than me and we are just 24 and 25 – so we have a long time to grow as a partnership.

“You can’t say what would happen in the future, but I would like us to continue racing together in stage races. We have built a lot this year and it takes a lot to understand each other and learn what the other rider wants.”

If anybody should know about what makes a good partnership it will be Lill, who has recently notched up a second win in the competitive mixed category at the tough nine-day Old Mutual joBerg2c – with her new husband.

“Riding with Darren at the joBerg2c demonstrated to me how having a good partner is so important to be able to do well. It is vital to know what motivates your partner.

“You ride so much better as a team when you are able to factor in their strengths and weaknesses and work with that knowledge.

“I think Darren and my partnership can teach me a lot for my other cycling partnerships.

“I have learned a lot from Darren. He is experienced but you cannot teach somebody if they are not open to learning. He is always giving me great advice and options, but he does it through quiet guidance.

“If somebody tells me what to do or orders me to try something then I normally don’t do it or don’t want to do it, so the way he guides me works well for us.”

Not surprisingly, Lill sees their biggest challenge as coming from the De Groot and Strauss team, although she is also weary of the Valencia Ladies team of Sam Sanders and Amy-Beth McDougall, while Theresa Ralph and Carmen Buchacher (Galileo Risk Velocity) are outside contenders.

“Robyn and Mariske will be the team to beat this year I would say. They will be strong, but all we can do is give it our best.

“Amy and Sam should also be good – and Amy also did the joBerg2c so she knows the route.”

With the final three stages of the joBerg2c encompassing the entire KAP sani2c route, some prior route knowledge could prove significant in the race for the title, particularly a new section of the route which includes the new and, according to Lill, aptly named “Iconic Climb”.

“The biggest change to the route is the new big climb out the Umkomaas valley, while the rest of the route is similar to previous years,” said Lill who will be taking part in her fifth sani2c after doing her first when she was just 16.

“The first few kilometres of the climb, after the water point, are similar to the normal route, but then you just go up the Iconic Climb, as it is so aptly named!

“It is about three kilometres of quite technical riding. There are places where you struggle for traction. I am very glad that I have done it so I know what to expect in the race.

“It is a tough section of riding, but I think it improves the day. After the climb there is a bit of dirt road and then you get on some nice trails near the end.

“It makes the race more interesting I think. The sani trails have become so smooth and fast that I think it is now nice to have a challenge that tests your skills a bit and that is not only for the top riders, but I think the backmarkers will also like it – it gives them some bragging rights.”

This year is the 13th edition of the KAP sani2c, the world’s largest mountain bike stage race, which takes place from Himeville to Scottburgh.